On an eight to six vote, the Fulton County Fair Board decided to hold only the junior fair portion of the annual Fulton County Fair, and non-spectator harness racing. The board made the decision at their meeting Tuesday night, June 16. Several details have yet to be worked out.–posted 6.16.20, 10:04 pm

Nancy E. Ries, 84, died June 12, 2020, at Fairlawn Haven in Archbold. She was born on Aug. 29, 1935, to the late Lawrence and Florence (Newcomer) Ruffer. She married William Ries, who preceded her in death in 2002. Nancy was an active volunteer, and a member of St John’s Christian Church in Archbold. Surviving are daughter and son-in-law, Linda […] 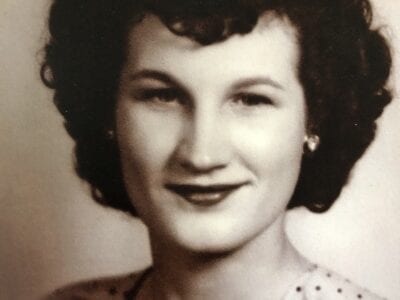 Anne Figy, age 90, of Wauseon, passed away June 11, 2020, at the Fulton County Health Center. Prior to her retirement, Anne owned and operated Enterprise Dry Cleaners. Anne was born on July 5, 1929, to the late Simon and Juanita (Austraw) Keafer. In August of 1948, Anne married the love of her life, Howard Figy, who preceded her in […]

John Warren Reeb, 37, Archbold, was taken to the Mercy St. Vincent Medical Center, Toledo, following a two-vehicle crash at the intersection Co. Rd. B and St. Rt. 108 Thursday, June 11 at 5:55 pm. In a press release, officials of the Ohio State Highway Patrol said Reeb was driving a minivan west on Co. Rd. B, when he failed […]

BASIC REPRODUCTION NUMBER: Governor DeWine today released the latest basic reproduction number or R0 (pronounced “R naught”) for eight regions of Ohio. The R0 represents the number of people, on average, that a person will spread a disease to. The Centers for Disease Control and Prevention estimate that COVID-19’s R0, without interventions, to be 2.5. With Ohio’s interventions, the R0 […] 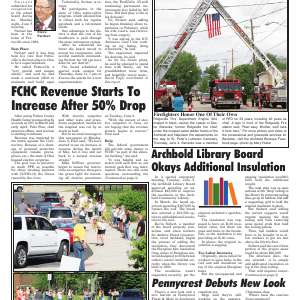 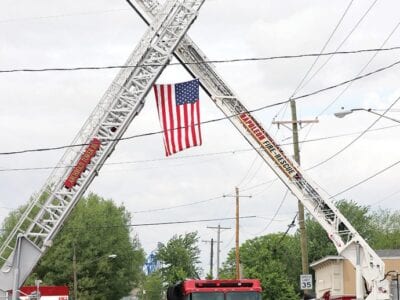 Firefighters Honor One Of Their Own

Ridgeville Fire Department Engine 904, draped in black, carries the casket of Dexter Benecke, former Ridgeville fire chief, under the crossed aerial ladder trucks of the Archbold and Napoleon fire departments on the way to St. Peter’s Lutheran Cemetery, Thursday, June 4. Benecke was a member of RFD for 53 years, including 20 years as chief. A sign in front […]

D.J. Neuenschwander
Special to the Buckeye

In a surprise move, Steve Switzer, Pettisville Schools superintendent for 38 years, announced his retirement. Switzer submitted his res ignat ion to the school board during its Monday night, June 8 meeting. Switzer has been at the helm of Pettisville since 1982. Best Place Switzer said it has long been his view that Pettisville is the best place in Ohio […] 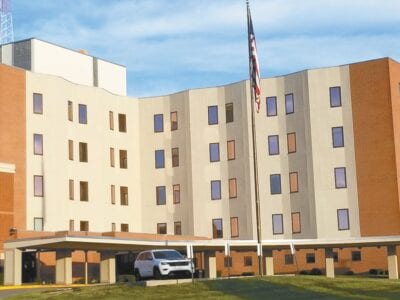 After seeing Fulton County Health Center revenue drop by as much as 50% in March and early April, Patti Finn, chief executive officer, said revenue is starting to increase. Revenue was impacted by the battle against the Coronavirus. Because of a shortage of personal protective equipment (masks, gowns, gloves, etc.), the state of Ohio banned elective surgeries. The goal was […] 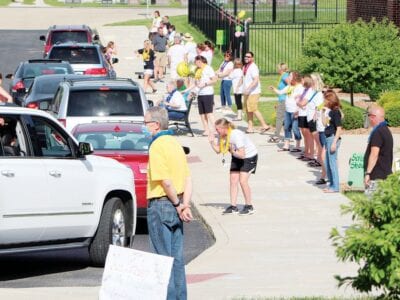 Schools turned to all kinds of unique activities as they worked under restrictions imposed by the Coronavirus pandemic. Parents of Archbold and Pettisville students drove their youngsters past their schools, where teachers and staff lined up to wave goodbye after the last day of school. Top: Pettisville teachers and other staffers said goodbye to their students, Wednesday, June 3. Center: […]