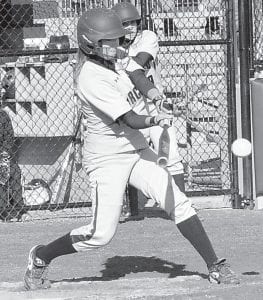 Mother Nature was the big winner last week as the Archbold softball team played only one game while having four games postponed.

Alyssa Ziegler was very sharp on the hill for the Streaks as she gave up only one hit while striking out eight and walking none.

The Streaks continued their offensive struggles at the plate as they collected only seven hits. Cassi Wyse led the way, going 2-3 with two doubles and a run batted in in the first inning.

The score remained 1-0 until AHS scored a pair of runs in the sixth. Shelby Cline led off with a double and Gabby Nafziger, pinch-running for Cline, scored on a throwing error after Peyton Dickman laid down a perfect bunt.

The third run came on a base hit off the bat of Madison Kohler.

Ziegler then finished off the Bulldogs by retiring them in order in the seventh. She retired the last 11 batters in order to completely eliminate the chance for a Bulldog rally.

The win moves the Streaks to 2-2 on the season.

“It was a tough week in that we were only able to get in one game,” said Joe Frank, AHS head coach.

“It is difficult to get any kind of rhythm at the plate when batters don’t see much live pitching. We are working hard to get better, especially at the plate.

“We will be playing 15 games in the next 20 days, so hopefully we can gain some positive momentum and build on it.”