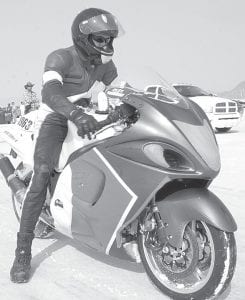 Left: Christian Grisier, astride the 300 horsepower motorcycle that would carry him to more than 200 miles per hour at the Bonneville Salt Flats. In his first run on the salt in 2010, he had to borrow a leather racing suit from a Canadian rider. This year, he bought a 20-year-old Italian suit that fit him perfectly. Above: Grisier looks at his 213.707 mph time slip after his crew told him he’d “only” gone 198 mph.– courtesy photos

Christian Grisier knew the insanely powerful motorcycle he was riding was traveling better than 185 miles an hour across Utah’s Bonneville Salt Flats, when he looked down and saw that his glove was caught in the throttle.

That was preventing him from opening the throttle the last one-quarter to oneeighth of an inch.

He knew he wasn’t getting the last possible bit of speed from the four-cylinder, turbocharged bike.

He freed the glove, and for the last quarter-mile of the two-mile speed trap, slammed the throttle wide open.

“I was furious with myself,” he said.

He stopped and got off the bike, and when the chase truck arrived, was told he had gone only 198 miles an hour, just missing 200 mph.

In 2010, Grisier, 29, and Elliot England, who was originally from Wauseon, modified England’s two-cylinder English Triumph motorcycle for the salt flats. 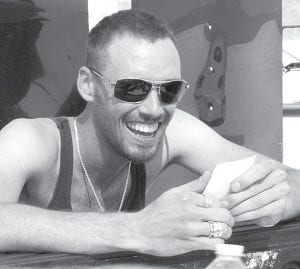 Running under the name of Her Majesty’s Fly By Fire racing team, they made one run at Bonneville, with Grisier going 135.110 miles per hour.

In 2011, they couldn’t get England’s machine running in time for Bonneville.

But between that first run and 2012, the team grew.

One new member bought a brand-new motorcycle, a Suzuki Hayabusa. The Hayabusa (Japanese for “Peregrine Falcon”) is widely considered the fastest production motorcycle ever built.

Grisier said Hayabusas off the showroom floor are speed-governor limited to 183 miles per hour. They can exceed 80 miles per hour in first gear.

After being ridden about 200 miles on the street, the bike was sent off to be modifi ed for land speed racing.

A turbocharger was added, increasing the four-cylinder, 1299 cubic-centimeter engine’s output by 120 horsepower, for a total of about 300 hp.

Also, the speed governor was disabled.

The team has been racing the Hayabusa and England’s Triumph on a 9,000- foot (1.7-mile) airport runway at Wilmington. Monthly events are held under the banner of the East Coast Timing Association.

With the addition of the Japanese bike, “Her Majesty” was dropped from the team name.

For Bonneville’s Speed Week, the team left Aug. 8, and passed both cycles through technical inspection on Aug. 10.

They left to return to Northwest Ohio Aug. 17.

During the days at Bonneville, Grisier said you can hear racing engines screaming, and smell burned racing gas. Sunlight reflecting off the white salt makes it brutally bright.

The team camped out on the salt; at night, it’s the exact opposite, dark and quiet.

While they were on the salt, Grisier said his friend England proposed to Natalie Blakeman, race team manager.

The Triumph does not have a wind-cheating fairing, and its frame was never designed for 140 mph speeds.

“But Elliot and I are confi dent and comfortable at 140. We know how it feels, and we know when it’s not right,” Grisier said.

The Hayabusa is entirely different.

He can squeeze his body behind the Hayabusa’s streamlined fairings and get out of the windblast.

“You can’t believe you’re going that fast. After that (175 mph), your brain starts melting,” he said.

On the salt, at high speed, the back tire will spin as much as 10% to 15% faster than the actual speed over the ground.

Grisier said the Hayabusa speedometer runs out of numbers at 185.

“I buried the (speedometer) needle and watched the tachometer (which measures engine speed in revolutions per minute) climb another 2,000 RPMs,” he said.

After finishing his fastest run and being told he just missed 200 miles per hour, Grisier said, “I was quite distraught and disappointed. I get back (to the pits) and I’m beating myself up.”

In the meantime, a member of the Fly by Fire team picked up Grisier’s time slip.

“I realized that everyone had been messing with me for a half hour,” he said.

“After a lot of profanity, I was jumping up and down with excitement.”