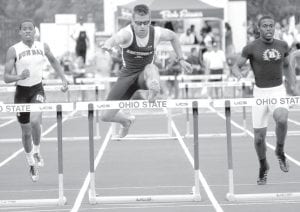 Danny Young, center, set a new personal and school record in the 300-meter hurdles in the Div. II final, winning the state title with a time of 38.0 seconds. Isaiah Walls, from Columbus Bishop Hartley, right, finished second in 38.95. Nicholas Lane, from Dayton Dunbar, left, was third in 39.11.– photo by Jack Frey

In addition to winning the event in every meet during the regular season, he had won the Northwest Ohio Athletic League, district, and regional boys 300 hurdles titles during the post-season.

And now, a state championship.

Young ran the finals in 38 seconds flat, a personal record and school record. He improved his time from the preliminaries by almost a full second, when he finished in 38.95.

With his time he was named USA All-Elite.

His time was 95 one-hundredths (.95) of a second faster than second-place Isaiah Walls of Columbus Bishop Hartley. 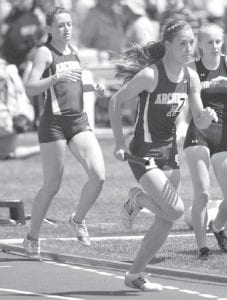 Left: Jensyn Garrow speeds off after the handoff from Tressa Parsley in the Div. III girls 4×400. The Blue Streaks finished fourth.

He was also a state participant as a freshman.

“When I crossed the finish line I just thought I did it…I’m a state champ,” said Young. “I’ve achieved my goal.

“I was very confident going into the race, but not cocky, and I just wanted to run a personal record and let the rest take care of itself.

“Last year I finished runner up, and I felt that I had some unfinished business to take care of.

“My goal was to break my own school record and hopefully move up one notch to become a state champion. I was concerned with us moving up to D-II, but I always remembered my brother’s words of ‘trust your training and let everything else fall in place.’” 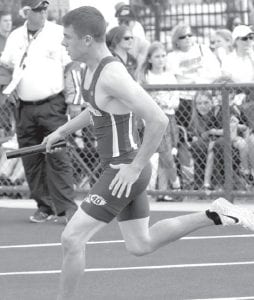 Right: Levi Wyse races around the track in the Div. II boys 4×400. Archbold finished fourth in the race.– photos by Donald Young

Danny’s brother, Donnie, AHS ‘02, was also a runner in high school who ran in the state meet.

“This championship is my favorite because it was all me,” said Young.

“I didn’t have to worry about anyone else running besides myself.

“I trained very hard for this over the summer and in the winter and put a lot of time into it.

“The 4×200 was special to me since it was my first state title and I was able to share it with my teammates.

“This means even more since it was my senior year and my individual event.”

The boys 4×400 team of Levi Wyse, Hayden Stamm, Blake Drewes, and Young also made it to the podium, finishing fourth in three minutes, 23.46 seconds.

The boys 4×200 team of Jacob Ott, Hayden Stamm, Wyse, and Young finished 10th in the preliminaries; the top nine advanced to the finals.

The Archbold girls 4×400 team of Angelica Reyes, Kas- sidy Garrow, Tressa Parsley, and Jensyn Garrow made it to the podium in the Div. III tournament, finishing fourth in 4:02.14.