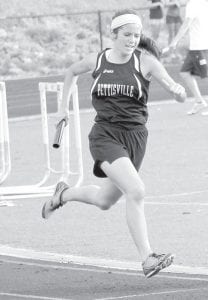 Pettisville’s Mikala Avina was on the 4×800 and 4×400 relays at the Div. III regional track and field meet at Tiffin, Wednesday, May 23, and Friday, May 25. Both relays finished eighth.– photo by Jack Frey

Danny Young, an Archbold senior, won the 300-meter hurdles regional title for the second straight year, Thursday, May 24, and Saturday, May 26, at Lexington.

This year he won in Div. II.

Young ran the race in 38.7 seconds, almost a full second in front of the second-place finisher, who finished in 39.66.

Young also is on the two AHS boys relay teams going to state.

The top four finishers in each event advance to state. 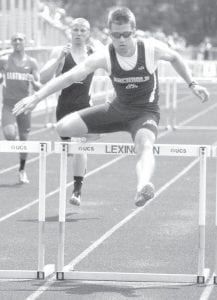 Tyson Dietrich finished seventh in the discus, while Drewes placed 12th in the high jump.

The Archbold girls team and both Pettisville teams participated in the Div. III meet at Tiffin, Wednesday, May 23, and Friday, May 25.

The 4×800 team of Darian Oberlin, Tressa Parsley, Kassidy Garrow, and Mara Beck will attempt to defend its state title after finishing third at the regional in 9:51.26. Toledo Christian won in 9:29.24.

Mara Beck runs the anchor of the 4×800 relay. Archbold advanced to state with a thirdplace finish.– photo by Jack Frey

The top four finishers in each event advance to state.

Archbold’s Rachel Brader tied for eighth in the high jump with a jump of four feet, 10 inches.

Columbus Grove’s Riley Eversole won with a leap of 5-5. 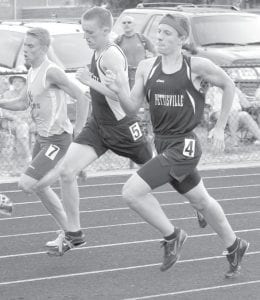 Pettisville’s Jeremy Mann, right, runs to a seventh-place finish in the 800 at the Div. III regional track and field meet.– photo by Jack Frey

Liberty-Benton won the boys event with 72 points. Pettisville finished 26th out of 38 teams, with 5. 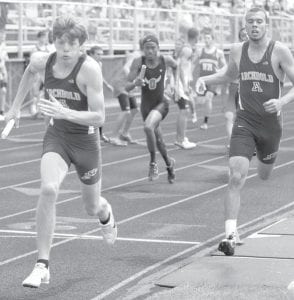 Blakes Drewes races away after taking the handoff from Hayden Stamm in the Div. II boys 4×400 regional. The Streaks advanced to state with a second-place finish.– photo by Donald Young

"I am very happy for the kids," said Dina Gladieux, AHS head coach. "This is a huge accomplishment.

"Hayden made the comment after the meet that this is the fourth year in a row that the boys 4×200 and 4×400 have made it to the state meet. Wow!

"I am proud of both the boys and girls and all that they have been able to do.

"I am especially glad to have them back together at one location!"

"We had two pretty warm days to deal with. All our kids stayed hydrated and we had plenty of ice on hand, which they used.

"For senior Tanner Hostetler, it was her last race in high school. Tanner, as a competitor, but even more as a leader, will be missed greatly.

"She has a great deal to be proud of looking back at her high school running career and the number of times she’s made it to the state level.

"The way she’s battled back from adversity, like when last summer she had a fractured leg… the way she led this girls’ team this year through example of practice and performance.

"We also had many young kids that the regional meet will be a great learning experience:

"•Jordyn Pursel, a freshman, who competed in the pole vault.

"•Our boys’ 4×800 team who will all be back next year that had three sophomores and one junior. 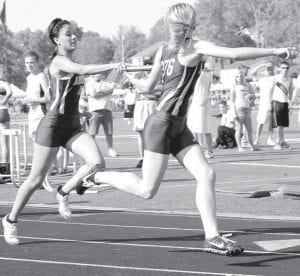 Angelica Reyes hands the baton off to Kassidy Garrow in the 4×400. The Streaks advanced to state with a second-place finish at the Div. III regional meet.– photo by Jack Frey

"•Sophomore Dominic Frey, who competed in the 4×800 on Wednesday, also qualified in the 3200, but was too ill to compete on Friday.

"We coaches are very pleased with what both the girls’ and boys’ teams accomplished this year. We think there is much to build upon for next year."