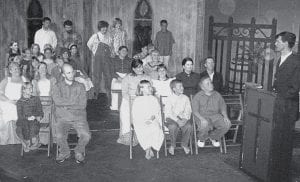 With the stage sometimes full of child actors, The Adventures of Tom Sawyer opened to a packed house Friday, Sept. 21 at Giffey Hall, Ridgeville Corners.

The retelling of the timeless Mark Twain classic moves along, with youngsters and adults blending to share the story that involves a mischievous boy, Tom, his orphaned best friend, Huckleberry Finn, various town characters, and even a murder.

There isn’t a bad actor in the cast, but some of the amateur thespians truly shine in their roles.

The youngsters handle some difficult roles well. Even on opening night, they never missed a line or skipped a beat. There were no blatant examples of stage fright or forgotten dialogue, although sometimes the children were hard to hear or difficult to understand.

Eliot Pitman, Bryan, does an amazing job as the title character, made even more amazing by the fact he’s only nine. He projects his voice well and never misses a cue.

Two to watch are adults Luis Kerswill as Injun Joe, and Jeff Patterson, as Muff Potter. Injun Joe is a despicable character, and Kerswill plays Injun Joe with a mean streak that is convincing and frightening. “Ole’ Muff,” is the town drunk, who’s fallen in with Injun Joe, and Potter handles it well, with a bit of comic relief.

Loyal Briskey is cast as the sheriff, and he fits it to a T. His towering stature and booming deep voice make him perfect for the role, yet he doesn’t overpower the others.

Chan Tinsman, 14, Archbold, is Mr. Dobbins, the strict schoolmaster, and he plays it with the right amount of edge in his voice.

ACT does its usual outstanding job with the technical aspects of sets and lighting. A nice touch is having actors stand at stage right and left and talk about the author, the play, and the characters, while the stagehands make the changes.