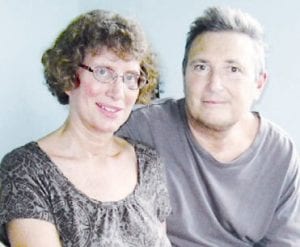 For Archbold native Cynthia Yoder, AHS ‘79, being thankful is about more than just Thanksgiving.

“For me, being grateful, having a grateful heart, is a good way to live,” she said.

She has much for which to be grateful.

She and her husband, Bob Gravelin, had been in the U.S. to visit family and attend the wedding of Kimberly Leininger, Yoder’s niece.

They were returning to their home in Sri Lanka July 30 when a taxi taking them home from the airport, a four-hour drive, crashed.

The driver fell asleep, and the taxi collided with a parked truck.

Yoder was in the back seat. She suffered two broken ribs and had five stitches in one eyebrow. She suffered a concussion, “and remembered nothing about the accident.”

In addition to bruised ribs, the tibia (shinbone) of his right leg was shattered.

“He now has a metal plate and seven screws inside his leg– way too much metal, he believes!” she said. 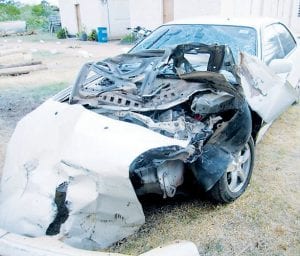 The taxi Cynthia Yoder and her husband Bob Gravelin were riding in when the driver fell asleep at the wheel and crashed into a parked truck in Sri Lanka. Yoder is teaching English at a university in the island nation off the coast of India. Gravelin suffered a broken leg as a result of the crash.– courtesy photo

Yoder and Gravelin, a former resident of Burlington, Vt., met while they were living in Palestine, in the volatile Middle East.

Together, they lived and worked in Romania, Harrisonburg, Va., and Kuwait, before landing in Sri Lanka, an island country off the southern coast of India.

She is teaching English at Rajarata University, where all students take some English language classes.

“I’m here on a 10-month grant from the English Language Fellow Program, (which is) funded by the U.S. Department of State and coordinated by Georgetown University in Washington, D.C.,” she said.

Mike To The Rescue

After the accident, the couple spent a week in a Sri Lankan hospital.

Yoder’s brother-in-law, Mike Leininger (husband of her sister, Sandy), then flew from Marysville to help them.

“He was a lifesaver! Not only did he prepare and serve us three meals a day while we were recuperating, he also put aluminum screens on our windows to replace the mesh screens the rats were able to chew through,” she said.

“He also put door sweeps on the doors and filler in window cracks, hoping to prevent more scorpions from finding their way inside.

“We will be forever grateful.”

Wildlife in Sri Lanka is both a joy and a challenge, she said.

“The animal kingdom never ceases to entertain us as we watch monkeys, mongooses, peacocks, and birds of all sorts from the balcony of the house we rent.

“They are right in our front yard, which is literally the jungle. The monkeys’ daily visits often include a romp on our rooftop.”

They’ve also had elephants in their backyard late at night. Unfortunately, the massive creatures destroy property in their search for food.

“Our house had its own ecosystem when we first moved in, including bugs in our water glasses and on our food plates within minutes of our sitting down to eat.

“It took several months to get rid of most of the frogs, whose favorite spots were inside the toilet and on the sinks.

“We still have geckos on the walls, spiders in our dishes, ant infestations in our cupboards (everything must be kept in reclosable plastic bags), and the occasional scorpion.”

In fact, they reported recently killing a fifth scorpion.

But for Yoder and Gravelin, it’s not all poisonous insects and frogs in the toilet.

“We take great pleasure in getting to know the people around us. They have been warm and welcoming and have taught us a lot about the Sri Lankan way of life,” Yoder said.

“It’s the simple things that we enjoy the most, like seeing how many ways coconuts are used, watching farmers in the rice paddies, and speaking a little Singhalese.

“We also enjoy traveling and seeing different parts of the country– the beaches, tea plantations, ancient sites, and Buddhist and Hindu temples.”

After Leininger left, “Our landlords helped with laundry, cleaning, food preparation, and anything we needed,” Yoder said.

“Throughout this whole experience, we have felt supported and cared for by our neighbors, friends, my colleagues at the university, and people we didn’t even know.

“There are wonderful people all over the world, and we feel so thankful to have experienced that fact in an amazing way here in Sri Lanka.”

They also relied on support from friends and family back home who phoned and emailed.

“That, and God’s grace, helped us make it through the roughest moments when we felt lonely and confused,” Yoder said.

Today, about three months after the accident, Gravelin is starting to walk without crutches.

“Getting up and down stairs without support will be the next hurdle,” Yoder said.

For her Thanksgiving, Yoder said they will host 20 colleagues from the university for a celebration “to express my appreciation for their friendship and help during our time here in Sri Lanka.”

“While not always easy, living in other countries is very rewarding to me. I value the friends I make, what I learn from them, and how they connect me to the larger world,” she said.

“Living abroad gives me many new experiences to ponder and appreciate. It helps broaden my own views and perspectives.