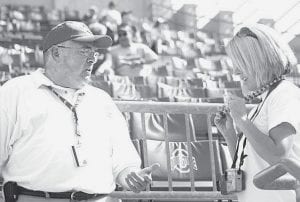 As an usher at Ohio Stadium, Dan Yoder, Archbold, helps an OSU fan find her seat at a Buckeyes football game in October. Yoder became an usher this year after waiting six years to be called. One perk of the job? He gets to watch the Buckeyes play. – photo by Scott Schultz

He’s an usher at Ohio Stadium, where the Buckeyes play home games.

Ushers help fans find their seats. They differ from Red Coats, who are stationed outside the stadium and check bags, purses, and tickets.

Yoder said he jumped at the chance to be an usher because, “to be real honest, tickets are so hard to come by. I enjoy going to games in Columbus.

“People ask me how much of the game I get to see. The Red Coats have to stay outside through the first half. But I pretty much get to see the whole game.”

The pay for an usher isn’t great. The university provides uniforms and a parking pass, which is worth $10.

“We get a hot dog or a pop for free, but if we want both a hot dog and a pop, we have to pay for one of them.”

But there is that big perk- getting to see the game.

Yoder said he talked to Jim Tressel about being an usher when Tressel was in his second year (2002) as head OSU football coach. Tressel told him it might be two or three years before he might be called.

In fact, six years went by.

While being able to watch the game is the reason Yoder became an usher, he said he enjoys the work.

“You get to meet a lot of neat people. I enjoy it.”

Once, a family arrived early for a game. With them was a boy, four or five years old, who stared in wide-eyed wonder at the huge stadium.

Yoder allowed the boy to go down by the field. In return, the boy asked to have a photo taken with Yoder.

The last game on this year’s home schedule is Saturday Nov. 22, against “that team from the north,” Yoder said.

As a Buckeye fan, he doesn’t say the word “Michigan.” – David Pugh