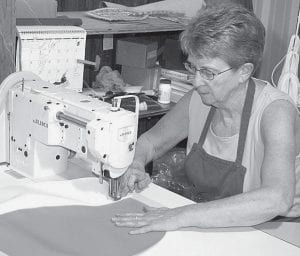 Trudi Short sews parts to make a new seat cushion for an Allis-Chalmers tractor, in the correct orange and white colors. Y&F Cushions, founded in Archbold in 1956, recently moved to Wauseon.- photo by David Pugh

After five decades in Archbold, Y&F Cushion Manufacturing has been relocated to Wauseon.

The company, started in 1956 by Elias Frey, was purchased by Pat Riley of Riley Tractor Parts, Wauseon.

“Bob Frey called me Thanksgiving week 2004 and wanted to know if we were interested. They were selling the seat cushion business,” Riley said.

Y&F was a natural fit for Riley’s business, which sells parts for tractors and combines mostly manufactured prior to 1970-1975, he said.

“Now, instead of buying seats from somebody else, we buy them from ourselves,” Riley said.

Y&F Cushions operated out of a building on Yoder & Frey’s Co. Rd. 24 complex since its inception. The move to Wauseon was completed in the last three weeks.

When he bought the company, Riley said he got everything.

“Equipment, raw materials- everything but the building. The four ladies making seats are still with us,” he said.

Trudi Short, rural Archbold, has been with Y&F since 1984. Other employees are Mable Ann Klinger and Jan Stevens, Archbold, and Ann Siebel Cordes, Wauseon.

Short said one of Y&F’s most popular products was the Fanny Farmer seat cover for oldstyle tractor seats.

“We made thousands of them,” she said.

The company has dozens of colors of material in stock to make cushions to match different tractor brands. On the day of the interview, Short was working on orange and white seats – Allis Chalmers colors, she said.

Riley Tractor Parts purchased a building in Wauseon that had been an auto parts manufacturer. The company completed the purchase in June 2007, and moved in that September.

Riley said he wanted to consolidate all of the company operations under one roof.

“It just made sense,” he said.

Y&F has been known to do some custom work, from repairing seat cushions all the way to reupholstering furniture.

“They still do,” Riley said.

Riley and his wife Dana are originally from Wisconsin. A job opportunity brought them to Ohio in 1981, and they stayed.

He was working for an Iowa firm that rebuilt driveline parts for tractors and combines. While he was on the road selling for that company, he started “wheeling and dealing” parts on his own.

Riley Tractor Parts was incorporated as a business in 1984. By 1996, the business had grown to more than a sideline, so he left the road and began to concentrate on the business.

The company purchases parts from a variety of suppliers, some of which are made to Riley Tractor Parts’ specifi cations. The parts are then wholesaled to implement dealers, repair shops, and salvage yards.

Riley said 12 years ago, the business was operated by himself, his wife, and one other employee.