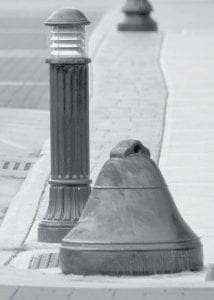 At left, a decorative lighted bollard and a bell bollard on the northwest corner of the North Defiance Street-Stryker Street intersection. At right is a yellow metal pole that temporarily replaced the bell bollard that was on the southwest corner of the intersection. The traffic cone on the ground marks the spot where the lighted bollard stood. Note the rubber marks on the right side of the pole, against which semis have rubbed tires. – photos by David Pugh

The yellow metal post at the intersection of North Defiance and Stryker streets is a temporary addition, standing in for a new bell bollard.

When Archbold Village Council authorized the redesign of North Defiance Street in 2005, several decorative lighted bollards were placed near intersections.

But after the one at on the northwest corner of the intersection of North Defiance and Stryker streets fell victim to semi rigs cutting the tight corner too sharp, the special bell bollards were installed. The bell-shape was supposed to push a truck tire back into the street.

In the months after the bell bollards were installed, several trucks drove over the bollards, with the wheels getting stuck. Heavy-duty tow trucks would free the semis.

At one point, the overhang of the Rupp Furniture Building (the former Vernier McLaughlin Probeck hardware store) on the southwest corner was struck by a semi and damaged. 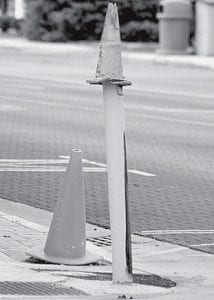 The bollard turned out to be the loser on Monday, May 5, when a semi driven by Elmi Obsieyeh, 51, Columbus, turned too sharply from Stryker Street to travel south on North Defi- ance Street.

The trailer caught on the bollard, but the truck continued forward, ripping the cast-iron bollard, set in concrete, out of the ground.

After Obsieyeh was located, Archbold police issued him citations for making an improper turn, leaving the scene of an accident, and driving a vehicle that was too long.

Dennis Howell, Archbold village administrator, said the village is still waiting on the delivery of a new bollard at the intersection.

In the meantime, black rubber has been observed on the temporary metal post, indicating at one time, semi tires had rubbed against it.

Howell said in connection with the bollards, the stop bar on the eastbound left turn lane on Stryker Street was moved back five feet.

Drivers wishing to turn north onto N. Defiance St. must stop at the stop bar, which is far back from the intersection.

The move gives truck drivers more room to maneuver their 50-plus foot trailers through the tight intersection.