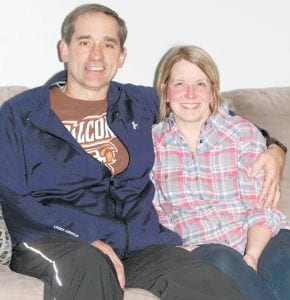 Joe and Kim Wyse at their home in Archbold. After Joe suffered a massive stroke in 2015, and months of recovery, the two still smile and laugh with one another. Kim said the pair is thankful for what they have and the support they received from the community.– photo by David Pugh

No one could fault Joe and Kim Wyse if they were bitter.

At 45 years of age, Joe, a former college football standout and ex-marathon runner, a man in outstanding physical condition, suffered a massive stroke that changed their lives.

But they’re not bitter; rather, they are thankful for what they have.

“We’re thankful for the progress Joe has made in his recovery,” Kim said.

Joe suffered the stroke, officially known as a CVA, or cardiovascular accident, the night of Sept. 22, 2015.

Joe spent three weeks at the Mercy St. Vincent Medical Center in Toledo. When he left for the Flower Hospital rehabilitation unit, he couldn’t tolerate sitting in a chair, Kim said.

Today, he walks, sometimes with the help of a cane.

The right side of his body was affected by the stroke, so the accelerator of his old pickup was moved to the left side of the foot well.

With that modification, he drives himself around town.

“A few months ago, we went to see a neurologist we had never seen before. He was looking through all of Joe’s CT (computed tomography) scans and MRIs (Magnetic Resonance Imaging scans) and stuff like that, and he kept going, ‘Wow…wow…’

“Finally, he turned to us, looked at us, and said, ‘You know, 80% of strokes this large are fatal. The fact that you walked into my office today, that’s amazing,’” Kim quoted the neurologist as saying.

Kim said the family is thankful for all the support it has received.

There were “lots of prayers,” Kim said.

“We had people bringing meals after Joe had his stroke for quite awhile. That really helped. They were delicious.”

She put the amount in the thousands of dollars.

Joe underwent months of rehabilitation, some of which was difficult.

“It was hard. It was painful,” Kim said.

He continues to work on rehab, but, “he’s kind of to the point now where his progress has leveled off.”

If there is one area where Joe is challenged, it is his speech. Mostly, he answers questions with a yes or no.

But don’t think he can’t communicate.

He expresses himself with shrugs and gestures, an eye roll now and then.

He can shoot Kim a look and she laughs in that cute couple kind of way that belies the fact they’re old enough to have a 17-year-old, or that one of them had a massive stroke two years ago.

Kim admits that there were some scary days soon after the stroke. As a registered nurse, she has more medical knowledge than most people.

“But I also think it helped. I knew what to expect, I knew what he would need, and understood what the doctors were saying.”

Kim said the pair has remained upbeat “for the most part.

“We have days when we’re down, but for the most part I think we’ve been good. Optimistic,” she said.

“Would you agree?” she asks Joe.

Today, Joe keeps busy. He goes to the high school and walks the track. He works on a speech therapy application on a tablet computer. He goes to Mom’s Diner, his brother’s restaurant, for lunch.

Does he have to pay for his lunches there?

Joe looks at Kim and smiles, Kim laughs and asks, “Do you want to plead the fifth?”

“We have a lot to be thankful for. We wouldn’t be here without all the support from everybody, and all the progress that Joe’s made.”–David Pugh