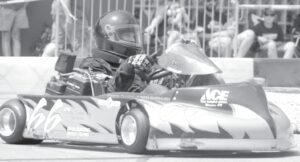 Logan Wyse, on the track in his racer powered by a flat head engine, is shown negotiating turns 1 and 2 on the oval track laid out downtown, Sunday, Aug. 8. Wyse swept the flat head class, winning two heats and the feature race.– photo by David Pugh

Logan Wyse, Archbold, who had not been behind the wheel of a racing kart since 2014, put together a racer, went out, and swept his class, winning both heat races and the feature event in the kart races in downtown Archbold, Sunday, Aug. 8.

Wyse pulled off the sweep in the flat head alcohol class (flat head engine, using alcohol for fuel). He also raced in the medium class (375 pounds, kart and driver) where he won the first heat, then was third in the second and the feature.

The other area racer to sweep was seven-year-old Shelby Rychener, Pettisville, in the kid kart class. Kid karts, as the name implies, are for younger racers.

John Huffman, veteran Archbold kart racer, said the track, laid out in the 200 block of North Defiance Street, proved tricky, and in the early-going, some racers ended up in the plastic barriers that lined the outside of the track.

While most would look at the track and say it was flat, it’s actually not. The street is “crowned,” meaning the middle is slightly higher than the center so water drains to the curbs when it rains.

Huffman said as the karts went into the turns they were traveling slightly uphill, killing some speed. At the center of the turn they went over the top of the crown, and picked up some speed as they exited the corner.

That slight downhill caused some racers to drift to the outside of the track faster than the drivers expected.

Huffman said the track was similar to the indoor track at Columbus. Many racers brought their indoor karts and ended up using the same setup they would at Columbus.

There were 33 entries, but several drivers were using the same kart to run different classes.

Between heats, racers had to make adjustments to the karts to get ready for the next class, and that took time.

That resulted in some lag between heat races, and toward the end of the hot day, some of the crowd filtered out.

Huffman said they hoped for more entries, but the racers who did come were “good ones” from Ohio, Indiana, and Michigan.

There was the occasional scare, as karts tangled with each other and the outer barrier.

In one case, a kart lost a rear wheel.

In the junior clone class, Colton Rychener, 9, Pettisville, tangled with another racer coming out of Turn 2, and both ended up in the barrier.

The other racer flipped upside down.

Spectators and track officials quickly pulled the kart off the driver, who scooted out of the pile.

The kart was turned over, restarted, and the driver continued the race.

Huffman raced in both the heavy clone class and the 400s (400-pound class). He said he and his kart weighed in at 430, but he was keeping up with racers weighing 380 pounds, “so I felt pretty good.”

In the 400s he won his first heat race– his first win on the streets of Archbold.

“That was a special win,” he said.

Positions are for two heat races, one feature race.

•Vance Nofziger, Pandora, formerly of Archbold: 400s: 5, DNF, 5 (loaned his kart to Wheeler after Wheeler’s was damaged in a crash.