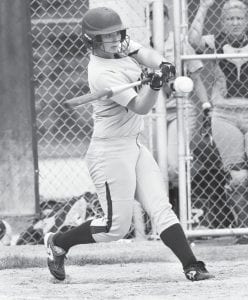 Blue Streak senior Cassi Wyse belts a home run with two outs in the sixth inning to give AHS a 2-1 lead that held up, giving Archbold a district championship, Saturday, May 21.– photo by Mary Huber

The Archbold softball team won its eighth Division III district title in 10 years and 29th in school history with a pair of hard-fought wins against Elmwood and Eastwood, both members of the Northern Buckeye Conference, last week.

The Streaks fell behind 2-0 in the top of the first inning before tying the game with two runs in the bottom of the second.

A Madison Kohler single scored the first run while Macey Rupp singled in the second run to tie the score at 2.

Archbold took a 5-2 lead with three more runs in the third. A Shelby Cline two-run single and another Kohler run-batted-in single did the damage.

The Royals tied the score at 5 in the fourth before Archbold took the lead for good in the bottom of the inning.

An RBI double by Cassi Wyse and an RBI single from Cline gave the Streaks a 7-5 lead. 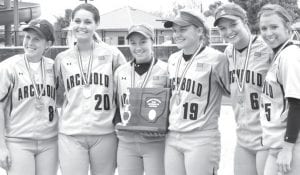 Payton Robinson added a run-scoring single in the sixth to make it 8-5.

The Streaks had a big game offensively as they collected 12 hits. Alyssa Ziegler, Robinson, Cline, Kohler, and Peyton Dickman all had two hits each.

The Eagles, ranked ninth in Division III by the Ohio High School Softball Coaches Association, came into the contest 23-0 behind the pitching of Ashley Hitchcock and a strong offense.

Robinson shut down the Eagles on five hits and gave up only one unearned run. She struck out six and walked one.

The teams traded runs in the first inning and the score remained deadlocked at 1 until Wyse’s home run.

Archbold collected only three hits in the contest, including an RBI double off the bat of Robinson, to put the Streaks ahead briefly 1- 0 in the first.

“We played a good, solid game, and obviously Cassi’s homer was huge for us,” said Joe Frank, AHS head coach.

“We were fortunate to be able to overcome some defensive miscues and hang on for a quality win against a good team.

“Payton threw a tremendous game, and we made enough plays defensively to seal the deal.

“We look forward to representing the school and community at the regional level next week against Paulding.”

Cardington-Lincoln (25-1), ranked second in the state, plays Milan Edison (22-3), ranked 10th, in the other semifinal, tomorrow, Thursday, at Bellefontaine.

Winners play for the regional championship and a trip to the state tournament, Saturday, May 28, 12 noon, at Bellefontaine.