Wyse Builds Community In The Netherlands 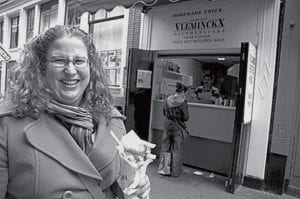 Jackie Wyse eats fries prepared Dutch style in Amsterdam. However, Almere was her home for the five years she spent as a missionary and student in the Netherlands. A young city founded in 1976, the land was sea bottom before being drained in the 1960s. “In a country where you think of very old things and old buildings, I was living in a context that was brand new,” said Jackie. “That was really fun.”- photo by Ryan Miller for Mennonite Mission Network

“People always think, “Netherlands: tulips, wooden shoes, marijuana in the Red Light District,” said Jackie Wyse, who lived there five years as a missionary and student. “But what really makes the culture different is all these little details.”

In the Netherlands, “there are more bikes than people, I think,” said Jackie. Bicycles are not only the vehicle of choice, but a means of socializing. Friends meet, then ride together on specified bike paths to their destinations, said Jackie.

It’s not as easy as it sounds.

On rural Archbold roads, Jackie was accustomed to riding behind others for safety reasons.

Dutch people required a more “terrifying” experience: biking side-by-side while conversing in Dutch, said Jackie. “There’d be someone right next to me on both sides maybe, we were talking in what was for me a foreign language, I was on this little, tiny bike path, and there’d be oncoming bikes and we’d have to pull back.

“There were hundreds of little moments like that,” Jackie said, and each one exposed her to another facet of true Dutch culture.

But just for the record, in the countryside, Jackie did see a few people wearing the infamous wooden shoes.

“They wanted someone with a different cultural perspective to come and work with their staff for a few years,” she said.

It was a convenient situation for someone who was herself looking for a cross-cultural experience. “I’d always been interested in Europe, so it was a really great opportunity,” Jackie said.

She’d already earned a bachelor’s degree in English from Hiram College and a Master of Divinity from Associated Mennonite Biblical Seminary, Elkhart, Ind., but there was more to learn upon arriving in the Netherlands in August 2002.

“It was all so different,” she said. “My first priority was to learn the language and figure out how the culture worked and find my place in it.”

Then she could start focusing on her job.

“The core of our drop-in center was just to be present in the neighborhood,” she said.

The center’s trademark was open hours for chatting over coffee.

Jackie’s job was to help improve the center’s relationship with the community. “My function was half research-oriented and half helping out with the daily functioning of the center,” she said.

Her research included interviewing the surrounding neighborhood to determine residents’ views of strengths in the area. With a better understanding of the community, the results helped drop-in center staff create programming.

“We did a lot with thinking about the gifts of the neighborhood and how our work as a community center could build on those,” Jackie said.

She also investigated interactions between similar centers and their communities through visits, and, with a Dutch coworker, developed course materials to help Mennonite churches become more involved in their communities.

She wasn’t building churches or preaching on the corner, but “working toward building understanding between people and caring for people,” she said.

The center welcomed people of all faiths or those with no faith at all.

“It wasn’t our goal to recruit church members,” Jackie said. “We were there to serve the community.”

However, she said, the staff was honest with visitors who asked questions, since Jackie said for herself and other staff members, the work was “a way to make our own faith concrete.”

Spiritual conversations were “always in terms of what we could learn from each other,” Jackie said. “It was not onesided. We don’t have all the answers, and we want to respect everybody’s freedom to go where they feel comfortable.”

The method was effective since churchgoers in Dutch urban society form a “very, very tiny minority,” only 2-4 percent in Almere, said Jackie.

When “church is seen by people in the Netherlands as old-fashioned,” she said, the center is a way to make God’s love relevant.

“Offering something that people actually want, a place to meet one another in the neighborhood, is great.”

The informal context allows people to ask questions and recognize God’s love in action if they are ready.

No matter how many of the center’s attendees show interest in spiritual matters, the center’s aim of forming connections within the community is being met.

“The goal is that what we do during the week is meaningful,” said Jackie, “and I know that that’s the case for many different people in many different ways.”

“How That Changes You”

“When you’re living in your own culture, it’s really easy to forget that the rest of the world has a very different perspective on things,” Jackie said.

“I learned a lot about seeing things through the eyes of another culture.”

In the Netherlands alone, there are 11 provinces with different language dialects, and Jackie was exposed to more cultures and languages in bordering European countries.

Even living in a country of a different language and acquiring that language made her more aware of other viewpoints. “It’s really hard to explain how that changes you. It has broadened my horizons,” she said.

Jackie said even in the United States, there are many people with different cultures and backgrounds.

“I just think it would be great if we could all be really intentional about learning from their experiences because they probably have a lot to teach us.”

Jackie’s father had traveled overseas by freighter during a volunteer term in Germany, and since then, Jackie said, “I was always interested.”

She realized her dream on a 12-day journey back to American shores, where she was greeted by her parents, John and Sharon Wyse, rural Archbold, Monday, July 24.

“It went really fast,” said Jackie of her time abroad. “I can’t believe five years are over and I’m not going back.”

During her last year, Jackie completed a master’s degree in Hebrew Bible studies at the Free University of Amsterdam.

Now, her love of stories takes her to Emory University in Atlanta, Ga., to pursue a doctoral degree in the same subject area, where she’ll be reading Biblical narratives in ancient Hebrew, their original language.

While she’s completed her missionary work abroad, Jackie hopes her Old Testament background will help her continue to contribute to the Mennonite church by balancing the church’s traditional New Testament focus to offer a more wellrounded Biblical perspective.

“I think my dream would be to get a teaching job somewhere,” Jackie said. “To teach Old Testament.”