Wyse A Semifinalist For Gagliardi Trophy 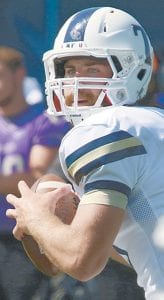 Evan Wyse, AHS ‘14 and son of Jon and Jackie, has been named one of 10 semifinalists for the 2017 Gagliardi Trophy, an award presented to the most outstanding football player in NCAA Division III.

A senior at Trine University, Angola, Ind., Wyse is the quarterback of the football team and is majoring in mechanical engineering.

The Gagliardi Trophy, given annually since 1993, recognizes excellence in athletics, academics and community service.

The trophy will be presented on Wednesday, Dec. 13, in Salem, Va., at a banquet kicking off the Division III championship weekend, which culminates in the Stagg Bowl on Friday, Dec. 15.

The four finalists, who will be announced Tuesday, Dec. 5, will be on hand for the announcement of the winner and presentation of the trophy.

Nominations were submitted by colleges across the country. The Gagliardi Trophy national selection committee is comprised of 40 former small college football players, former Gagliardi Trophy recipients, business leaders, academicians and sports writers from around the country. Each casts a ballot ranking the 10 semifinalists.

A fan vote, which will serve as the 41st committee member, is live on D3football.com and runs until Monday, Dec. 4:

Eight of the 10 semifinalists, including Wyse, played Nov. 18 in the first round of the Division III national playoffs.

The Thunder (11-1) ended its season with 11 wins, the third time in program history they ended with 11 victories.

Wyse, the 2017 Michigan Intercollegiate Athletic Association Offensive Player of the Year, led the conference in touchdown passes (17) and ranked sixth in passing yards (1,401) during the regular season.

Wyse has volunteered at the Steuben County Humane Society, serves on the Trine Student-Athlete Advisory Committee, has been involved with cleanups on campus and local highways, volunteered with the March of Dimes and at the Cameron Ball, and shoveled snow for elderly members of the community.