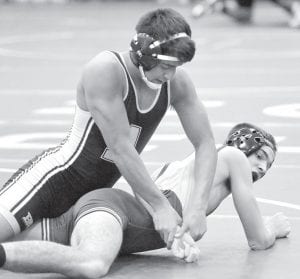 In the opening match, the Streaks dropped one individual match to Bryan to capture an easy 57-3 win.

Senior Anthony Gonzalez (285 pounds) started with a pin to get the Streaks off to a good start.

After losing a decision at 132 lbs., Archbold scored 39 straight points for the victory.

“It’s hard for them to match up with our older kids in the lineup. 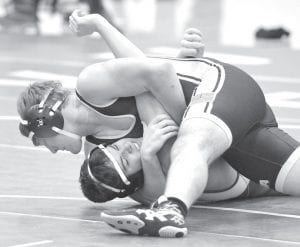 Gibson Burkholder (182 pounds) was one of four Blue Streak wrestlers who pinned their Delta opponents. He also won a 3-2 decision against his Bryan opponent.– photo by Mario Gomez

“It was nice to wrestle that match going into the Delta match, to get a little mat time for our guys to get loose and get the nerves out.” Delta 54, AHS 24

In the final match of the night, Archbold fell behind 30-0 and never recovered in a 54-24 loss to Delta.

Four AHS wrestlers were victorious. Rocha, Grime, Soles and Burkholder won via pins for the 24 points.

“Against Delta I thought their kids wrestled a lot more physical than us,” said Becher.

“I thought that was a giant difference in the match.”