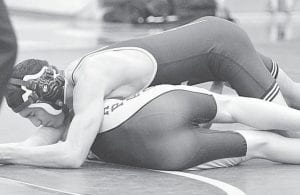 The opening night of the Division III Ohio High School Athletic Association regional wrestling team tournament was a successful one for the Blue Streaks.

ArchbolddefeatedFairview 61-18 in the second round of the Region 17-A regional quarterfinals, Wednesday, Jan. 23, at AHS, to advance to the regional semifinals.

Fairview defeated Edgerton 52-30 in the first round of the regional quarterfi- nals.

Archbold now faces a familiar foe, Liberty Center, who defeated Paulding 45-33 in the other second round matchup at AHS.

AHS plays host for the Region 17-A regional semifi nals, tonight, Wednesday, 6 p.m. Wayne Trace and Ayersville wrestle on Mat 1, while AHS and LC wrestle on Mat 2. The winners wrestle each other 20 minutes af- ter the completion of the first matches.

This time, the Apaches tried to make it more of a match against Archbold. 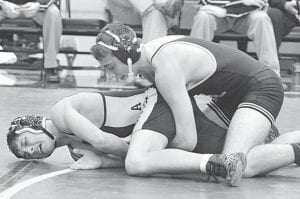 Scoring 12 more points this time, it would make no difference for Fairview as the Streaks jumped out to a commanding 43-0 lead en route to victory.

Lukas Rufenacht (126 lbs.) took his man to the second period before scoring a pin.

After a pair of Fairview wins, David Bell (182 lbs.) got the Streaks back on the scoreboard with another first-period fall.

Travis Jaramillo (195 lbs.) scored another pin and after another Fairview win, Lee Klinger (285 lbs.) wasted little time ending the match, scoring a pin in the first period and putting AHS one step closer to a trip to Columbus. 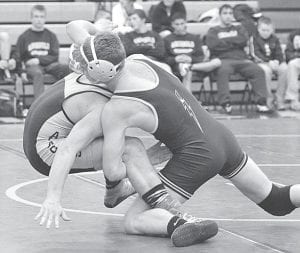 “We’ve obviously got some health issues right now. We had to put some other guys out there,” said Brian Becher, AHS head coach.

“Some of the guys that are traditionally in our lineup I didn’t think wrestled well. Regardless of whether they won or not, I don’t think we wrestled that well. We had some guys that I expect to wrestle better that didn’t.”