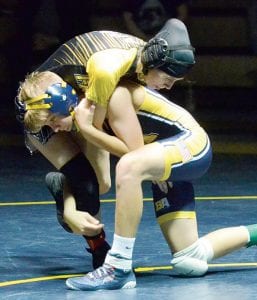 The Thunderdome was the site for a dual wrestling meet between Archbold and Fairview, Friday, Dec. 6.

The Streaks used the strength of nine bonus-point victories to win 54-27.

Of the 14 weight classes, only one match went the full six minutes.

“It was a good dual meet to start the season,” said Brian Becher, AHS head coach.

“There are little things we need to work on, but I’m pretty happy with our performance.

“The nice thing about (a dual)– it gives us stuff to work on before we get any more mat time.”

Andrew Francis (126 lbs.) won by forfeit. Rusty Short worked off his back to turn the tables and earn a first-period pin to give AHS some breathing room, 30-18.

After a short intermission when the crowd enjoyed three biddy matches, Fairview got a pin at 138 lbs.

Archbold then slammed the door shut on an Apache comeback with four straight wins.

The Apaches won the final match by decision for the 54- 27 final.

“I was a little disappointed in our older kids,” said Becher.

“You expect more out of them to set the tone.

“I didn’t think some of them were as aggressive as they could have been right away.

“But I was pretty pleased with the effort of our younger kids. They just need mat time.

“Everybody wants to win all the time but we’ll sacrifice these wins for wins in February every single year.”