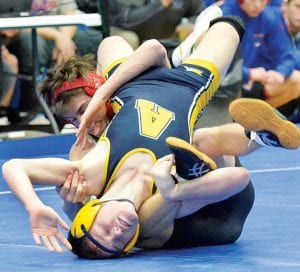 Archbold’s Shane Eicher flips to avoid being taken down by his Liberty-Benton opponent, Saturday, Feb. 2.– photo by Mario Gomez

Archbold defeated Edgerton 57-15 in the first round and then defeated Liberty Benton 56-18 to reach the semifinals against Northwest Ohio Athletic League foe Delta.

The Streaks lost to the Panthers 51-24 to bow out.

“We knew it was gonna come down to some bonus points for us to get the win,” said Brian Becher, AHS head coach.

“We kinda got caught there at 138 pounds. That was a nine-point swing. We’re just kinda outmatched at some of those weight classes.”

Milan Edison defeated Delta in the finals 46-27 to win the regional championship and advance to the state dual meet tournament. 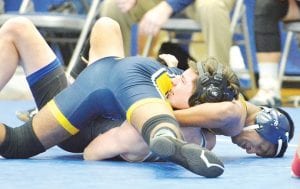 Francis, Garcia, B. Short, Yoder and Reyes all won by pins.

Francis and Eicher both won with pins to tie the score at 12.

The match at 138 lbs. turned the tide for good when Garcia, wrestling a close match, was caught on his back and lost by fall to give Delta a 23-12 lead.

Archbold lost by pin at 160 lbs. but won the next two matches– a pin by Ranzau and a major decision by Babcock to make the score 35-24.

Delta took the next three matches to close out the match and win 51-24.