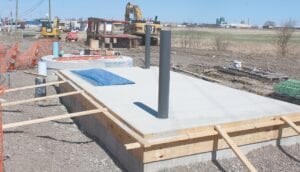 Work continues on the construction of a new sanitary sewer lift station along South Defiance Street, on the south side of the Brush Creek Bridge. In the foreground is the new valve chamber, where electronic equipment that operates lift pumps is installed. Behind the chamber is the wet well. Wastewater from the south side of Brush Creek flows into the well, and is then pumped to the north to eventually flow to the village wastewater treatment plant.– photo by David Pugh

“Road Closed” signs went up Tuesday morning, closing the street to thru traffic.

The project also includes new storm sewers and some sanitary sewer repair, and new pavement and curbs and gutters from Vine Street to North Lincoln Street.

New sidewalks are planned for the area as well.

The street will be resurfaced from North Lincoln Street to 100 feet west of Meadow Road.

Krueger said East Holland Street will be technically closed to thru traffic during construction.

“If they (motorists) don’t have a destination in the construction site, they should use an alternate street,” he said.

Krueger said village officials have been in conversations with the property owners of the Holland Court Apartments about vehicle access to the parking area. 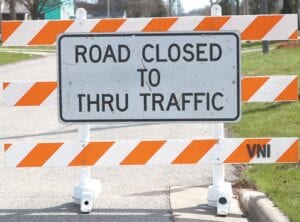 A driveway entrance to the north from Jane Court was closed several years ago because drivers were using Jane Court access as a thru street to get to East Holland Street.

Discussions are underway to reopen the Jane Court access.

Krueger said street reconstruction will probably start in early May.

The construction crew “has a pretty aggressive schedule. They hope to be done in early June.

To be done by that time, they have to start some road construction in early May,” Krueger said.

Another project currently underway is the sanitary sewer lift station on South Defiance Street, on the east side of the road and just south of Brush Creek.

Krueger said wastewater from homes and businesses south of the creek flows to the lift station, which then pumps it to a point where it can flow by gravity to the village wastewater treatment plant on Short-Buehrer Road.

Two underground chambers have been built.

The “wet well” is the point where wastewater flows into the station, and where it is lifted by two pumps. There is also a valve chamber, where a lot of the electronics that run the system are installed.

As part of the project, Krueger said a waterline had to be moved. That line was close to the curb, so the curb and sidewalk in the area will need replacing.

The existing lift station is still in operation. Once the new station is operating, the existing valve chamber will be stripped of equipment and abandoned in place.

The old wet well will become a manhole.

Vernon Nagel, Inc., submitted a bid of $669,070 for that project, 7% higher then the engineer’s estimate. Under the village charter, council can accept any bid up to 10% more than the estimate.

Krueger said village officials hope to have the new lift station in service in about three weeks.

Crews from Hillabrand & Sons Construction, Northwood, are working in the Woodland Oaks II subdivision, preparing for reconstruction of Rosewood and Dogwood courts.

A new water main has been installed. Next, water service lines to individual homes will be connected to the new main.

Krueger anticipates street construction will start in early May. Because the streets already have curbs and gutters, he said the existing pavement will remain in place longer, until new storm sewers and curb repairs are completed.

A temporary parking area on Miller Avenue has been constructed, but has not been needed.

Once street work starts, he said the lot will see more use.