Woodburner May Be Cause Of Sunday Fire 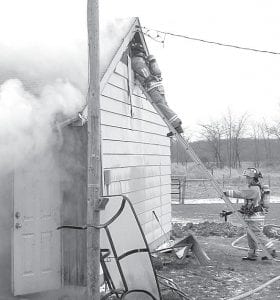 An Archbold firefighter attacks a garage fire by spraying water into the attic, while a second firefighter stands ready to assist. Andy Brodbeck, Archbold Fire Department chief, estimated the Sunday, Dec. 27, fire did $35,000 in damage, but the structure was still standing when the fire was declared extinguished.– photo by David Pugh

A wood-burning stove is believed to be the cause of a fire that did about $35,000 in damage to a garage at the home of John and Tammy Carder, Sunday, Dec. 27.

Andy Brodbeck, Archbold Fire Department chief, said the fire started around the wood burner. Carder told him the stove was not used often, but was started that day.

Firefighters were called to the Carder property, at 24541 US20A, about 12:04 pm. Brodbeck said when he arrived, Carder had moved a car and other equipment out of the garage. Heavy smoke was pouring out the overhead door opening.

“The firefighters did a really great job attacking it. They had it knocked down quickly, with the first 600 to 700 gallons of water,” Brodbeck said.

The West Unity Fire Department was called for water tankers.