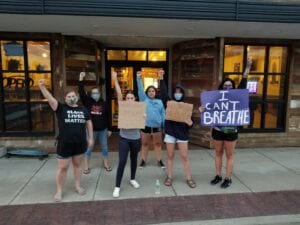 These women were in downtown Archbold Monday night, June 1, protesting the death of an Afrian-American Man in Minnesota. At far right is Sydney, Archbold, who spoke about the protest–photo by David Pugh 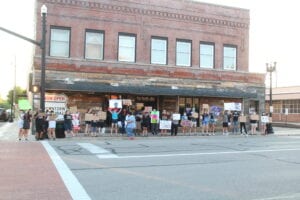 About 40 people showed up in downtown Archbold Tuesday night, June 2, for a second night of protesting the death of George Floyd in Minnesota.

Five women were on the corner of North Defiance and West Holland streets, Monday evening, June 1, protesting the death of an African-American man who was being held by police in Minneapolis, Minn.

Sydney Beck, Archbold, who started the protest, said it took a lot of courage to stand on the street corner with her “I Can’t Breathe” sign.

The phrase was uttered by George Floyd, of Minneapolis, as a police officer kneeled on his neck, and Eric Garner, who died while being taken into custody by New York City police in 2014.

Those protesting the deaths of African-Americans at the hands of police have since adopted the phase as a slogan.

Beck said there is racism in Archbold.

“It was scary because I was going to do it alone, because I had no other activist friends that were interested” in protesting in Archbold.

She said she was stopped at traffic signal in Wauseon, “and I held my sign out the top of my sunroof, and I had people honking and waving and I thought, ‘You know what? I can do this. I can stand in front of our city hall and I can start this.’
“I knew once I did, I would have others who may have been a little worried” to protest on their own join her.

Beck said the Archbold protestors were afraid of a backlash.

“We were mostly afraid to see our community’s true colors,” she said.

“But honestly, our community has really come through. We’ve had a lot more support than not. In fact, it’s probably been about 95% support. It’s been amazing.” 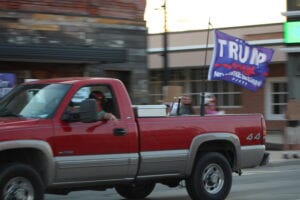 In some cities, police and protestors have clashed, with some throwing rocks and bottles at police and police responding with tear gas, rubber bullets, and other less-than-lethal ordnance.

In Archbold, Beck said, “We actually had a police officer stop and bring us bottles of water, and he had nothing but words of affirmation. He was kind, and we cried.

“Honestly, that’s our purpose. To just have peace between our police officers and the community…I liked that we were able to demonstrate peaceful protesting and peace with a police officer, and everybody working very cooperatively together.”

Beck said, “I believe that it’s small communities like this that have a lot of racism issues.

“I grew up in a family that shared a lot of racist views and perspectives. It never occurred to me why they felt the way they felt. 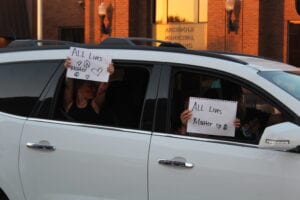 “It’s hard to tell how we truly interact with the black community,” she said.

“It also makes it more difficult to let go of those ideologies, that the black community is any less than the white community.