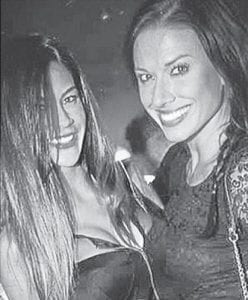 These two women were in the crowd during the Oct. 1 concert in Las Vegas that was the target of an attack by automatic gunfire. At left is Sheena Alonzo, 33. She is the “informal” daughter of James Ruffer, who has Archbold connections. At right is Stephanie Elsing, 34. They live in Las Vegas.– courtesy photo

She is the “informal” daughter of James and Margarita Ruffer, Las Vegas. Alonzo is the mother of Luke James Ruffer, Jim and Margarita’s two-year-old grandson.

James Ruffer’s grandfather and father lived in the Archbold area. His father, Victor Jack Ruffer, graduated from Archbold High School in 1939. He served in the Army during World War II, and later, went on to become a military pilot.

James Ruffer is now retired, with 30 years of service in the Marine Corps, the U.S. Navy and U.S. Air Force. He served as a jet fighter-bomber pilot in Vietnam, and later, as a flight surgeon.

Alonzo attended the concert with boyfriend Chris Cabral, 36, and friend Stephanie Elsing, 34, all of Las Vegas.

Ruffer said Alonzo didn’t realize what was happening at first, picking up on the commotion of those around her.

Cabral, on the other hand, recognized the sound of gunfire, and realized they were in danger. They fled the scene, with Alonzo being manhandled by Cabral.

Somewhere, she got blood– somebody else’s– on her blouse.

Elsing stayed behind and assisted the wounded. Ruffer said Elsing found herself “holding a man’s skull and brains together.”

Elsing stayed until sunrise, helping with the wounded. During the night, she removed her own blouse to use as a bandage for someone else.

Ruffer said both women have suffered “survivor’s guilt,” ashamed to have survived without wounds when 58 others died in the attack.

Both women lost their purses, phones, and other items; after several days, they were able to recover them.

“In a general way, but not far off, these people (Alonzo, Elsing, and Cabral) were the incidental targets of 64-yearold Stephen Paddock,” the man identified as the shooter, Ruffer said.