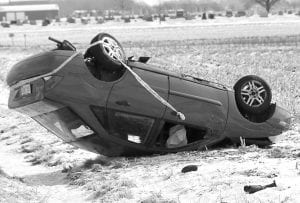 This car overturned after going out of control on icy roads during the early morning hours of Tuesday, Feb. 12. The driver, who was wearing seat belts and shoulder harness, was not injured. The wreckage was not removed from the field where it came to rest immediately.– photo by Mary Huber. Corrected 3.1.19, 2:15 pm

Josephine Elizabeth Grace Bloomer, 21, rural Wauseon, was not injured after the car she was driving overturned about 1:59 am, Tuesday, Feb. 12, a Fulton County sheriff report states.

The report said Bloomer was driving east on St. Rt. 2 when she went out of control on the icy pavement. She went off the road to the right, rolled over, and came to rest in a field upside down. Bloomer was wearing shoulder and lap belts at the time of the crash.

The crash occurred about a tenth of a mile east of Co. Rd. 21.