Woman Run Over By Her Own Vehicle 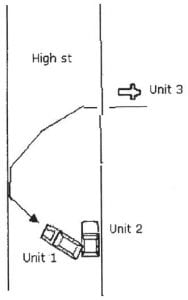 An Archbold police illustration shows the path of the driverless vehicle.

Mary A. Clair, 76, Archbold, was scheduled to undergo surgery yesterday, Tuesday, at the Mercy St. Vincent Medical Center, Toledo, after she was run over by the vehicle she had been driving.

Kent Clair, her son, said she suffered a crushed pelvis, broken ribs, and a punctured lung after the minivan ran over her about 10:25 pm, Tuesday, April 6.

Kent said as his mother drove into the driveway of her home at 404 High Street, she spotted a neighbor who she wanted to talk to.

Mary stopped the minivan, facing east in the drive, and got out of the vehicle. The engine was left running.

Kent and Martin Schmidt, Archbold police chief, said it’s unclear whether Mary put the minivan in park and the gear selector slipped into reverse, or she moved the selector into reverse instead of park.

Whatever the case, the APD report on the mishap states as Mary was getting out of the minivan, the vehicle began moving backwards with no one at the controls.

She was struck and knocked down by the driver door, then run over by the vehicle.

The minivan continued traveling backward onto High St., while curving to the south.

It struck the curb on the west side of the street. The impact with the curb redirected the minivan toward the southeast, where it struck a sport-utility vehicle parked on the east side of High Street.

Dalia Luna, 402 High Street, is the owner of the sport-utility. The vehicle was parked in front of her residence.

Archbold Rescue transported Mary to the Fulton County Health Center. She was later transferred by helicopter ambulance to St. Vs. She was listed in serious condition Tuesday morning.

Schmidt said such accidents, in which a driverless vehicle begins moving on its own, don’t happen often.

He said the best way to prevent such a mishap is to shut off the engine before getting out.–David Pugh