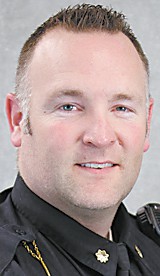 Archbold Village Council approved the recommendations of the council police and fire committee at its Monday, Nov. 20 meeting.

Wixom will take over from Thom Ross, whose retirement is effective at 2 pm, Friday, Dec. 22.

Donna Dettling, village administrator, said for the benefit of the audience at the Nov. 20 meeting that the police and fire committee discussed the appointment of Wixom at the Saturday, Nov. 11 meeting, which started at 6 am.

“A lot of times, things like this get talked about and worked through when we have those meetings,” she said.

Reading from the minutes of the police and fire committee, Dettling said the committee “discussed succession planning with chief Ross’ retirement, which is coming up Dec. 22.

“Chief Ross was able to give the village the valuable time he did to rebuild leadership and management of the police department.

“The appointment of and training of Leo Wixom as assistant chief of police has proven advantageous in achieving our goal of stabilizing the department and maintaining continuity of command.

“It had been the plan when Leo Wixom was hired that he be trained to take on the chief role when Thom Ross was ready to retire.

“Sometimes, to the audience it seems that we don’t even talk about this stuff, that we don’t debate it, but it all happens in committee.”

In October 2014, Joe Wyse, an 18-year patrolman with APD, was named chief of the department, to replace retiring Martin Schmidt.

Wyse actively served as chief until Sept. 22, 2015, when he suffered a massive stroke.

While he was kept on the village books as police chief until December 2016, he was unable to return to the job.

Ross took over the job as interim chief, while his pay was raised to full chief status.

He was later approved for retire-rehire, allowing him to collect both his retirement check from the Ohio Police and Fire Pension Fund and his regular paycheck.

Council officially elevated Ross to full chief at a meeting on Dec. 5, 2016.

At the same time, Wixom was promoted from senior patrol officer to assistant chief.

Wixom is a Fulton County native, and a 1993 graduate of Fayette High School. He attended Northwest State Community College.

He was a deputy for more than 20 years with the Fulton County Sheriff Department before he was hired by the village in January 2016.

In a later interview, Dettling said the assistant chief position will be left open until Wixom settles into his new job.

During the council meeting, council voted to hire Eric Leininger, another FCSD veteran, as a probationary senior patrol officer.

Dettling told council Eric Leininger had some requirements to complete before starting with APD.

He is the son of Ed Leininger.

Because Ed Leininger was absent from the meeting, he did not vote on his son’s employment.

Since Ed Leininger did not seek reelection, he will leave his council post at the end of the year.–David Pugh