With Help, Trejo Turns Life Around 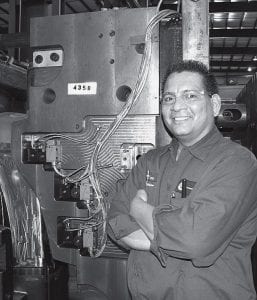 Tom Trejo, on the job at CK Technologies in Montpelier. Once homeless with an alcohol problem, Trejo turned his life around and graduated from Northwest State Community College. He also was promoted to a new job. The company manufactures plastic parts for heavy trucks, and for certain military vehicle applications.- courtesy photo

When Tom Trejo graduated from Northwest State Community College on Saturday, May 17, it marked another step in an amazing turnaround.

Trejo went from a life of substance abuse and homelessness to a successful career.

He did not do it alone.

“I thought I had ruined my life,” he said.

But, “some gentlemen saw something in me, something I thought I could never do.

Trejo said, “I did all right in high school. I was not at the top of the class.”

He graduated from Archbold High School in 1981 and started working factory jobs.

“I always drank,” he said. “As time went on, I drank more and more.

“I started getting back problems. At my last job, I was drinking to kill the pain, and I was taking prescription pain killers.”

“I lost everything,” he said.

“I dropped down to 170 pounds- I’m usually about 220. I didn’t have a job. All I did was drink. I was homeless, living with whoever would take me in.

He said he kept getting arrested, and was sent to the Corrections Center of Northwest Ohio.

But one night, Jamie Rodriguez, an Archbold Police officer, arrested him.

“That was the first time I felt like somebody cared,” he said.

That place was the Fresh Start Home halfway house in Alvordton.

His stay at Fresh Start “left a big impact in my life.”

Through the halfway house, he was hired by CK Technologies, Montpelier, in 1999.

His first job there was in a back room, grinding up defective parts. While there, his coworkers supported him.

Later, he started running presses as an operator, then moved up to material handler and die setter.

It was during this time that the company plant manager approached him about returning to school.

“I was still thinking I was not a good person,” he said.

But the plant manager kept suggesting more education, and in 2003, he started classes at NSCC.

College was hard, “especially when I first got into math. But I kept going along, asking people for help.

“When I started putting the pieces together, I found I had a desire, a need to learn,” he said.

Trejo graduated at the top of his class in plastics engineering technology; CK Technologies promoted him, making him an associate process engineer. He graduated as a member of Phi Theta Kappa, the junior college honor society.

Today, he and Rita, his wife of three years, live in Montpelier. They attend church in Bryan, where they work with teens.

Trejo also works in a prison ministry, working with inmates in Toledo.

“It’s very important to give back,” he said.

Trejo said he had lost confi- dence in himself. At NSCC, he learned to overcome his problems and how to ask for help.

“It brought back a lot of confi- dence.”

Today, with the help of Rodriguez, Fresh Start, his employers, and Northwest State, his life has turned around, and he’s been sober for more than eight years.

He tells others, “As long as you’re healthy, there’s still hope.

“As long as you’re breathing, there is hope.”