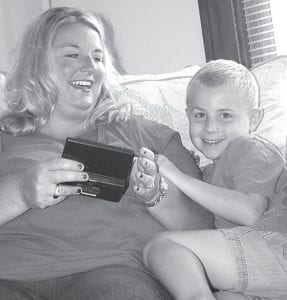 Above: Chase Cornell, 5, with his mother, Stephanie. Left: Chase with the Amazing Spider Man, a comic book, cartoon, and movie superhero. The opportunity to spend a week in Florida and meet Spider Man was Chase’s wish, fulfilled by the Make-A-Wish Foundation. Chase suffers from a rare hereditary disease.– photo by David Pugh and courtesy photo

Chase Cornell, Archbold, is like any other five-year-old boy, full of big, bright smiles for a stranger in his home.

The youngster had a chance to meet his favorite comic book, cartoon, and movie super hero, Spider Man, at a theme park in Florida.

He was accorded the opportunity to meet the webslinger because Chase suffers from Familial Mediterranean Fever, a rare inflammatory disease.

FMF mainly attacks people from the Mediterranean region, such as Sephardic Jews, Arabs, Armenians, and Turks. It is rarely seen in Caucasians.

Stephanie Cornell, Chase’s mother, said his case is considered one of the most severe in the world.

When Chase has an attack, he suffers a very high fever, severe abdominal pain, bloating, and dehydration.

“There is no pattern, no warning to the attacks,” she said.

Chase had been hospitalized several times, starting in 2008. In September of that year, “he was really, really sick.” 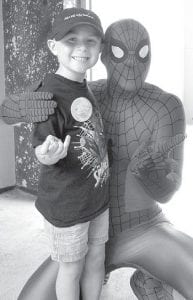 Eventually, a doctor from Israel at the Cleveland Clinic suggested FMF. Chase was officially diagnosed in December 2008.

Stephanie said it was the staff at the Cleveland Clinic who approached the Cornells about the Make-A-Wish Foundation, a group that gives seriously ill children a chance to live out their dreams.

“They do a lot of paperwork,” Stephanie said.

Then two people known as “wish granters” come to the child’s home and talk with the child.

Stephanie said the wish granters talk to the child, not the parents, to ensure they’re fulfilling the child’s wish, not that of the parents.

For Chase, it was Spider Man.

“I just do,” he said, with the undefeatable logic of a five-year-old.

To fulfill Chase’s wish, Make-A-Wish arranged for the whole family, including father Kevin, and sister Autumn, 9, to spend a week in Florida during April.

A limousine took the family to the airport, where they boarded a plane to Florida.

“The airplane was fun,” Chase said. He reported seeing clouds, and the ground, which was green.

The family stayed at a resort hotel specifically for Make-A-Wish. While there, Mr. Clayton, (an actor in) a bunny (costume) who is the mayor at the resort, tucked Chase in at night.

One of the features of a stay at the resort: ice cream for breakfast.

Of course, the highlight of the visit was Chase’s visit with Spiderman, who Chase said, “was nice.”

Chase also got the opportunity to feed dolphins at another facility. He reported giving the dolphins “real fish that were dead.”

FMF is an inherited disease, passed from “carrier” parents to children. Stephanie thinks the illness can be traced to her mother’s family.

Two of the “triggers” for an FMF attack seem to be stress and exercise.

There is no cure, but Stephanie said Chase is part of a clinical trial for a new drug. Even better news– the family’s medical insurance carrier agreed to pay for the drug.

Stephanie said she gives Chase injections in the stomach once a week. At first it was difficult, but now Chase is used to the procedure, and doesn’t fight.

“The injections help,” she said.

She hopes her son will grow into adulthood– there are those in their 20s and 30s who have the disease, she said.

Hopefully, Chase will stay out of the hospital as well.

“The food is disgusting,” he said.