Winning Contests Is Way Of Life For Local Woman 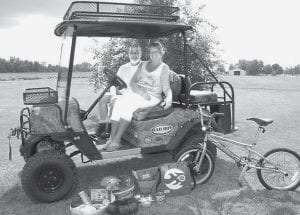 Laurie and Terry Rohlf sit aboard the $7,000 all-electric all-terrain vehicle Laurie won from entering a contest. In front of the ATV are just a few of the other prizes she has won. Laurie said she enters about 10 to 15 contests a day.- photo by Rita Bilen

When you hear the words “sweepstakes prizes,” do you ever wonder if anyone actually wins?

Well, they do. Laurie Rohlf, rural Archbold, is one such lucky lady who has been winning sweepstakes for eight years.

It all began on the job, when Rohlf saw a friend of hers making a copy of something.

It turned out to be a sweepstakes newsletter. Her friend gave her a copy and explained how to start entering contests.

“Shortly after that I became disabled and couldn’t work anymore, so it’s been my lifeline, really,” she said.

She currently spends an average of ten hours a week mailing out sweepstakes entries.

In the beginning, many of her family and friends were very skeptical about her chances of winning anything.

She has proven them wrong by winning so much that she is hard-pressed to say exactly how many things she has won.

After she won her first prize, “they were behind me 100 percent.”

Her biggest prize was an allelectric all-terrain vehicle worth $7,000, which was delivered recently.

Although entering contests is mostly a hobby, Rohlf said, “In the winter it’s more of an obsession. In the summer there are too many other things to do outside. I guess I’d call it a seasonal obsession,” she said.

Many of the items she has won have been useful or fun. But there was one item she didn’t really need: a VHF marine radio, used primarily on large bodies of water.

“We don’t have a lot of need for it here unless you have a boat on Lake Erie,” she said.

So why enter that particular contest?

She said there may be 20 prizes listed on a sweepstakes and, “you may end up getting the one that you don’t necessarily want.”

She sells some prizes, gives some away, and keeps a few for herself and her husband, Terry.

Mostly her family and friends have been her beneficiaries.

“I have a group of girlfriends who come over, and they say, ‘Well, what have you won lately?’ So I bring in all of the stuff that I want to sell and they kind of bid on it,” she said.

When Rohlf won the freestyle bike, her son-in-law wanted it badly.

“I told him that I sold it. I had to hide it. Then I put a big bow on it (for Christmas) and brought it down. He was surprised.”

One tip that Rohlf finds helpful in winning is the sweepstakes newsletter to which she subscribes called Sweepsheet. com. It lists the sweepstakes that are the most winnable, gives hints, and explains how to enter each contest. It costs $49 per year, but Rohlf has recouped her money “tenfold, at least.”

She was told early on that once you start entering sweepstakes, “you have to give it six months before you can expect a decent win.”

Currently Rohlf and her family are enjoying her new ATV.

“Never in my wildest dreams did I ever think I would win anything like that. We’ve had a blast on it.”

She is happy to share her thoughts on entering contests, because it’s been so enjoyable for her.

“It’s very fun to just get the mail. When the UPS or FedEx guy comes I say, ‘Oh my gosh, I wonder what I won today?'”