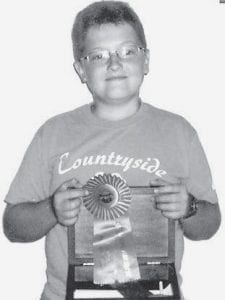 Nathaniel Ballmer, son of Mark and Jackie, rural Archbold, competed at the 2008 Ohio State Fair. He competed in rabbit skillathon, Breed I.D. and judging, showmanship, and the poster contest. Ballmer received a first place in skillathon, first in the poster contest, and fourth out of 22 participants in showmanship. In rabbit he received three first places, two seconds, and a third. He is a member of the Countryside Clovers 4-H group.- courtesy photo