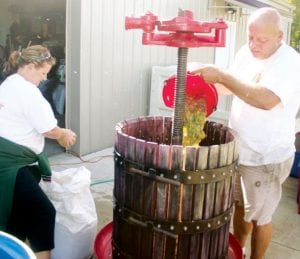 Julie and Steve Nofziger press grapes at their winery, Knotty Vines Farm & Winery, located south of Pettisville on Co. Rd. 19. They hope to be open for business for the holiday season.– photo by David Pugh

So far, the Knotty Vines Farm and Winery, which started with the planting of the first grape vines in 2008, has yet to make a profit.

In fact, Julie and Steve Nofziger, the proprietors, say so far, they haven’t even had any income.

But both are confident their project will generate revenue soon.

The Archbold couple say they could be open for the holiday season, possibly in time for Thanksgiving.

But while the winery is a for-profit venture, the Nofzigers agree that it is also a labor of love.

“Almost all the labor in a vineyard is manual labor,” Steve said.

“When you sit behind a desk all day, at five o’clock I’m ready to get outside,” Steve said.

They also have help from family and friends.

“When it comes harvest time, it would take ages if it were just the two of us,” Julie said.

Among the helpers are their daughters, Lindsey (Alex) Ames, and Lana (Spencer) Johnson. Both live in Archbold.

“Sometimes people just want to see the process, so they will come out for an hour or two,” Julie said.

After the harvest, “we’ll have our own harvest party.”

In addition to their love of the outdoors, there was a practical side to starting a winery.

The two are building the business on land that was originally part of Steve’s family farm. They have three acres at the corner of County Roads 19 and C.

“Really, what are you going to do with three acres?” he asked.

It’s not really enough land to farm corn and soybeans, and that would take a lot of investment in equipment, he said.

Along the way, they’ve had some great mentors. Lee and Joy Wyse are cousins to Ju- lie; they have a winery in Newcomerstown, in eastcentral Ohio.

Also, they said Phil and Pam Stotz, of the Stoney Ridge Winery in Williams County, have helped.

Steve also credits his parents for instilling in him a love of farming and for being outside.

To start the winery, the Nofzigers selected French hybrid grapes from a supplier in upstate New York near Erie, Pa.

The French hybrids were selected because they will survive Northwest Ohio winters. California vines won’t.

Julie said around Lake Erie, California grapes can be grown because the lake itself will moderate the climate. Pettisville is too far away to benefit from the lake effect.

They have five varieties of grapes growing on their property.

Two things that have taken a great deal of time were the state and federal licenses required to operate a winery.

Was that job difficult?

“It’s government,” Julie simply answers. “A lot of things, you’re not sure what they mean, so you have to make calls and have things explained to you.”

“But they worked with us really well,” Steve said.

“Frustrating would be a better word– frustrating and time-consuming,” she said.

The process is sped up by the fact that it’s done over the Internet.

Before any of the wine can be sold, it has to be labeled. The label designs are done, but must go to the federal government for approval, and to the State of Ohio to be registered.

“We have finished wine that’s not bottled or labeled yet. Once we have that done, we’ll start,” she said.

Establishing the name of their business “took us longer than about anything else,” Julie said.

“We wanted something that means something.”

As they watched one of the varieties of grapes grow, they saw the vines twisting and knotting. That inspired the name.

“And, it’s a play on knotty pine. Knotty Vines,” she said.

This summer, one project they finished is the tasting room, where people can sample the wines, and perhaps enjoy a snack.

“There will be a very limited type of food offered,” Julie said.

“We needed more room for customers than for food prep.”

The couple doesn’t plan a big marketing campaign when they open, relying on word of mouth instead.

“We’re not sure we can keep up with demand,” Steve said.