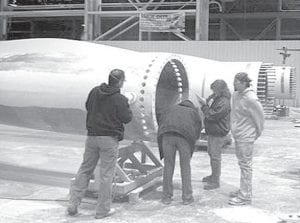 Workers from Global Blade Technology, Evansville, Ind., put the finishing touches on the last blade for the Pettisville School District wind turbine. An official from Marous Brothers, Willoughby, reported to Steve Switzer, superintendent, Monday that blades one and two were being weighed. The first coat of paint was to be applied to the third blade on Tuesday. The first two blades were to be shipped from the Indiana plant at noon today, and arrive Thursday; the third won’t leave the plant until early Thursday morning. Plans call for the blades to be installed Friday.– courtesy photo