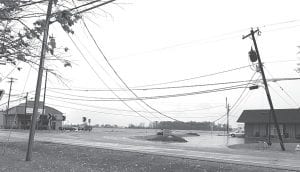 High winds damaged utility poles throughout Fulton County Tuesday, Oct. 26, including this one on St. Rt. 66 at the St. Rt. 2 intersection north of Archbold. The low-hanging lines blocked the roadway. Fulton County Sheriff Department dispatchers triggered the county tornado sirens at 11:16 am in response to a National Weather Service tornado warning, based on radar observations. The all-clear announcement was given an hour later. Other locations with damage to utility poles were Co. Rds. D and 9, N and 16-3, and E and 3. Also, a pole on the Toledo Edison high-voltage distribution line behind the ConAgra factory broke, but the wires remained intact.–photo by Mary Huber