Will Fulton County Fair Have A “Freak Out”?

No Decision Yet Whether Ride Will Be At Fair 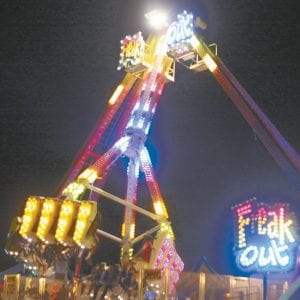 The “Freak Out” ride spins riders at a previous Fulton County Fair.– photo by Mary Huber

Freak Out is “the same, but different,” than “Fireball,” the ride that failed catastrophically at the Ohio State Fair, Wednesday, July 26, resulting in the death of 18-year-old Tyler Jarrell, of Columbus.

Seven others were injured; some seriously.

Poor Jack has Freak Out, which, like Fireball, sits riders in seats in a circle that’s parallel to the ground.

Fireball and Freak Out are built by KMG, a manufacturer of amusement rides based in the Netherlands.

The Ohio State Highway Patrol is investigating the accident, but KMG released a statement from Albert Kroon, product manager, which said one of the gondolas, a group of six seats attached to the pendulum arm that make up the circle, detached.

Passengers were sent flying, one as far as 50 feet away.

“It was determined that excessive corrosion on the interior of the gondola support beam dangerously reduced the beam’s wall thickness over the years. This finally led to the catastrophic failure of the ride during operation,” Kroon said.

The company issued a safety bulletin with an inspection protocol for the 37 other Fireball rides around the world.

Gary Bohlander, of Poor Jack, said the Fireball ride that broke in Columbus was 18 years old. It was considered a “first-generation” Fireball.

Fireball was redesigned later, and the second-generation Fireball rides are not affected by the problem, Bohlander said.

Fireball vs. Freak Out

Bohlander said while Fireball and Freak Out look similar, they are totally different in design.

“It’s the same, but different,” he said.

When KMG introduced Fireball, it was successful, Bohlander said.

In today’s market, he estimated a new Fireball ride would cost about $1.5 million.

But Fireball was too big and too expensive for many smaller operations. KMG determined it was missing out on a big part of the amusement ride market, so it developed the smaller Freak Out.

Fireball carries six gondolas in the circle on six arms or beams, with six passengers in each gondola.

Freak Out carries four gondolas on four arms, with four passengers in each gondola.

When collapsed and folded for transport, Fireball requires two semi trailers. Freak Out can be carried on one.

Poor Jack was at a carnival in southern Indiana with its Freak Out ride when the Columbus accident happened.

The following morning, Thursday, July 27, Indiana officials shut down all Fireball and similar rides in the state.

A KMG representative in the United States told the Bohlanders not to get excited; there was nothing wrong with Freak Out, and the factory was working on a letter saying that.

The carnival was to open at 5 pm on Thursday. Before the opening, state officials called to say Freak Out could be operated.

The results of the Columbus accident have been mixed for Poor Jack.

Business has been down since the accident.

Revenue from food sales and games has been as strong or better, but ride revenue is off, he said.

At the same time, Freak Out continues to be popular.

“Everywhere we set up, it’s our best ride. No one is shying away. People are lined up to get on it. It’s mostly teenagers,” Bohlander said.

But quite a few parents have taken a stance, not allowing their kids to ride carnival rides.

“I’ve never seen anything affect us like this. It was totally at the wrong time of year,” he said.

When asked if the Fulton County Fair Board will allow Poor Jack to bring Freak Out, Wyse said the issue has not been discussed.

He said Poor Jack management won’t bring a ride if there is any question about its safety.