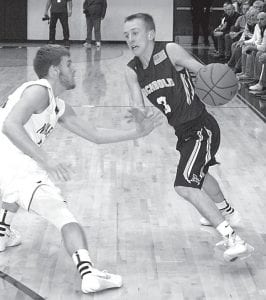 Eli Miller attempts to penetrate inside against Napoleon. The sophomore scored 13 points in Archbold’s 63-57 non-league loss.– photo by Scott Schultz

The Archbold boys basketball team capped off the weekend with a trip to Napoleon to face the Wildcats in the Grand Canyon, Saturday, Feb. 13, for a nonleague contest.

After trailing at the half, the Wildcats came back to pick up a 63-57 win.

Napoleon, ranked ninth in Division II by the Associated Press, improved to 16-4, while the Streaks slipped to 13-7.

The Wildcats had their hands full in the first half, with Archbold leading 19-11 after the first eight minutes.

Kaiden Bedsole, who led AHS with 15 points; Eli Miller, who chipped in 13 points on the night, and Bryce Williams combined for four three-pointers in the stanza to lead Archbold.

The Streaks continued to control the first half and went into the locker room leading 28-23.

Brett Lauf kept the Wildcats close, scoring 12 of his game-leading 22 points in the first half.

Bedsole opened the second half by scoring on a baseline drive just 17 seconds into the third, and Napoleon immediately called a time-out.

The time-out paid off for the Cats as they went on to take their first lead of the night since the first quarter, 34-32, with 2:30 left in the quarter.

Archbold knotted the score at 34 on a pair of free throws from Austin Welch, and regained the lead on a three by Ian Radabaugh.

Napoleon answered with a pair of jumpers.

The Streaks held for the last shot but turned the ball over as the quarter came to a close with Napoleon leading 38-37.

The Wildcats came out firing to start the final eight minutes, building a 47-37 lead before Mike Weigand hit a pair at the charity stripe for the first Archbold points of the quarter at the 4:48 mark.

Archbold closed the gap to 53-50 on a Bryce Williams three with two minutes remaining, but couldn’t hold off the Cats, getting outscored 10-7 for the 63-57 final.