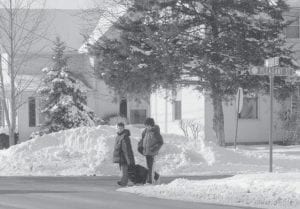 Council continued a discussion about sidewalk snow-shoveling at its Monday, Feb. 2 meeting. However, snow piled high at intersections is another concern. Two students walking home after school had no choice but to walk in the street, Friday, Jan. 30. A mountain of snow plowed from village streets blocked shoveled sidewalks at the northwest corner of Park and Pleasant streets. The snow was nearly as tall as the boys.- photo by Mary Huber

Councilmen discussed the possibility of an ordinance requiring people to remove sidewalk snow during the Jan. 19 meeting, but Howell said the Ohio Supreme Court said property owners could not be constitutionally required to remove snow.

Kevin Eicher, councilman, said he had gotten “an earful” from a citizen, who felt the village should be responsible for removing snow from sidewalks.

“That conversation did not go well,” he said.

Another concern that surfaced was snow at intersections. Snowplows push snow out of the intersections and onto the sidewalks, sometimes creating piles four and five feet high.

That much snow makes it impossible for an individual to remove, Eicher said.

It was also noted with this winter’s snowfalls, snowplows must drive faster to throw the snow farther.

Wyse said he had received a few compliments on the village snow removal efforts. He said some communities don’t plow side streets.

At the Jan. 21 meeting, Morton said he was upset by people who physically can clear their sidewalks, but choose not to.

“It’s still frustrating to drive by and see people clearing their driveways, but ignoring their sidewalks,” Morton said Monday.

Archbold Village Council agreed to allow the Village of Archbold to purchase road salt for next winter through the Ohio Department of Transportation.

On top of that, Howell predicted that because ODOT will buy road salt in massive quantities, the ODOT contract price will be the best.

This year, Archbold was able to purchase road salt at $74 per ton.

Under the contract with the current salt supplier, Howell said Archbold was told how much salt it could have by the supplier, who arrived at that number by taking a five-year average of salt used by Archbold.

Howell pointed out one of the years in the average was a particularly mild winter, when only 250 tons were used.

Archbold was allocated 525 tons by the supplier. Right now, there’s about 300 to 320 tons still in the village salt storage building.

Jim Wyse, Archbold mayor, said he had heard of road salt selling as high as $147 a ton; Howell said he could purchase an additional 200 tons at $160 a ton.

“We can get more, but it will be expensive,” he said.

Howell said in the future, he would like to talk to council about building additional salt storage space for the village. Right now, Archbold can store 400 tons.

When the salt storage building was built, Archbold had 25 miles of paved roads; now, the village has 40 miles.

“It’s a different situation,” he said.