by the Buckeye News Hounds 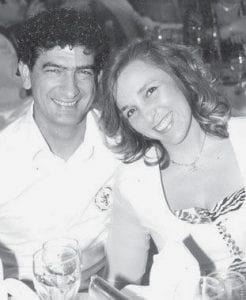 Dimitrios Mentoras, who lives in Thessaloniki, Greece, recently ordered an online subscription to the Archbold Buckeye.

His is the first international online subscription order the newspaper has received.

Mentoras was a foreign exchange student at Pettisville in 1980-1981. He was a 16-yearold junior at PHS, and his name in the U.S. was spelled Dimitrios Medoras.

While at Pettisville and Northwest Tech he lived with David and Sharon Sauder, Pettisville, and their three children, Pam, Kent and Anita.

Mentoras has beem a computer programmer in a software house in Greece since 1988. The firm is now a partner of Microsoft Hellas.

Mentoras stays in contact with Dave and Sharon and still calls them “mom and dad,” be- cause, “since I was far away from home all these years they were the best parents I could ever have,” he said.

He still feels like a brother to Pam and her husband, Wes Graber, Kent and his wife, Mary, and Anita.

He said Anita visited him with Erin Weber, and “we had lots of fun.”

Mentoras subscribed to the online Buckeye because he liked Northwest Ohio and was interested in keeping up with what’s going on.