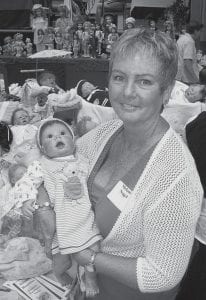 Melanie Nagel, Archbold, holds one of the 14 dolls she’s made, at the annual Sauder Village doll show last Saturday and Sunday, Aug. 4-5. Doll making has been Nagel’s year-long hobby since she took a class offered at the Village this time last year. It takes about 30 hours to make one doll, Nagel said. “It’s a whole process you go through.”- photo by David Pugh

During the day, Melanie Nagel is assistant administrator of the Village of Archbold. Evenings, she works in a home “salon.”

Only this “salon” isn’t for real people. It’s for dolls- dolls that look like real people.

Nagel and her sister were introduced to the lifelike dolls through doll collecting. “We got interested in seeing the process of making them,” she said.

So the two signed up for a doll-making class, offered by Sauder Village in conjunction with its annual doll show.

Now, one year after the first class, Nagel showed 11 dolls she created at a booth in this year’s doll show, held at Sauder Village, Saturday and Sunday, Aug. 4-5.

She had some selling success there, and plans to continue selling her dolls over the Internet as well.

Nagel has made a total of 14 dolls through the process, which she said starts with a “real plain, vinyl kit” of unpainted doll parts.

With heat-setting oil paint, Nagel creates skin tone on the doll body by applying a layer each of flush color, red and twotone flush color.

In her home oven, she bakes the doll at a low temperature for eight minutes, she said, “so it sets the paint” between each layer.

Each doll spends over an hour in the oven by the end of the process, which requires eight bakes.

Nagel paints blush color on the face, nails on fingers, and even veins on the head, arms, and wrists to add the lifelike element.

Eyes are painted or inserted, depending on the doll’s style.

Nagel stuffs the doll’s body, applies eyelashes to the lids of open-eyed dolls, and uses magnets to secure a pacifier if it is among the doll’s accessories.

“Then the hair is what’s very interesting,” said Nagel. In the 30 hours required to finish one doll, six or more of those hours is necessary just to apply a full covering of hair.

For the process, Nagel’s materials include mohair and a mushroom vice needle, which has three small barbs on the side.

So doll owners can “actually brush and comb the hair and style it,” Nagel said. She secures the hair strands poking through the underside of the scalp with a layer of glue to finish.

Nagel has enjoyed doll making. “It’s been fun,” she said. “Like a little hobby.”

But for someone who says she bounces between hobbies, Nagel is ready to return to scrapbooking after a yearlong hiatus.- Alicia Buckenmeyer

—— Politeness is to human nature what warmth is to wax.- Scho