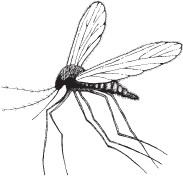 Officials at the Ohio Department of Health announced last week they had confirmed 2012’s first case of WNV encephalitis in an 85- year-old man who is hospitalized in Clermont County.

In a press release, Ted Wymyslo, ODH director, said the appearance of the first human WNV case is “about a month earlier than what we’ve seen over the last several years.”

There have been 374 mosquito pools that have tested positive for the virus. At the same point in 2011, the ODH lab had 59 positive tests.

Because it is impractical to test individual mosquitoes for the virus, groups of mosquitoes are caught in special traps, and then the group, or “pool,” is tested.

By the end of 2002, state officials had recorded 441 cases of humans made ill by the West Nile Virus, with 31 deaths.

If WNV is present in Lucas County, then it’s in Fulton County, “because mosquitoes don’t respect county borders,” he said.

Oricko said the Fulton County Health Department does not plan on conducting any WNV testing.

“If it becomes appropriate, if it looks like we are becoming the center of something, we will be looking at testing some pools,” he said.

Oricko said now, the issue is awareness… being aware that WNV is in the area, and taking precautions against mosquito bites.

With this year’s drought conditions, one would think that mosquitoes, which need standing water to breed, would not be much of a threat.

However, the Culex mos- quito, which transmits WNV, actually does well in dry conditions, preferring to breed in organically rich waters such as shrinking water in ditches and catch basins.

Also, hot temperatures have boosted the mosquito life cycle and amplification of the virus.

Few people who are infected with the West Nile Virus will become ill, and even fewer seriously ill.

•If outdoors between dusk and dawn, when mosquitoes are most active, wear long pants, long-sleeve shirts, shoes and socks.

There are essentially two levels of illness associated with WNV.

West Nile Fever is the less dangerous of the two. Symptoms include fever, headache, fatigue, and body aches. Occasionally, skin rashes and swollen lymph glands are seen. The illness can last from a few days to several weeks.

People over the age of 50, and some immune-compromised persons such as organ transplant patients are at the highest risk for becoming ill when infected with WNV.