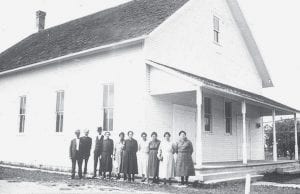 This weekend, West Clinton Mennonite church will celebrate 100 years of ministry at the corner of Co. Rds. D and 18.

The celebration begins Saturday evening with a meal served by the church youth group. The meal will include several special treats such as apple fritters, rosettes, and kettle corn. Donations collected at the meal will go to support the youth activities of the church.

The meal will be followed at 7 pm by a hymn sing that will include music drawn from five different hymnals used by Mennonite congregations during the past 100 years.

On Sunday, the congregation will gather for a special worship service with former minister Rocky Miller as a special guest speaker. Miller was pastor at the church for seven years in the 1980s.

At 10:30 am, during the normal Sunday School hour, time will be set aside to share memories from the past. People as old as 90 have agreed to share, and there may be time for those in attendance to share their own memories. 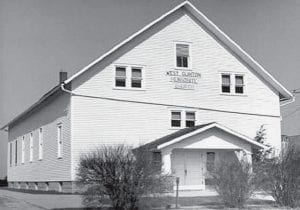 At noon on Sunday, everyone is invited to a pork roast with side dishes and desserts prepared using old recipes handed down in families who attend West Clinton.

Following the meal there will be another service featuring storytellers and musicians. One group of seven ladies who sang together 30 years ago will gather again to share their music.

The ladies group includes several local residents and some former area residents. One of the singers will be Diane (Diener) Omondi, who currently lives in Africa.

West Clinton was one of two Mennonite churches that were built in 1908 to help alleviate overcrowding at Central Mennonite.

According to a story in the January 10, 1908, edition of the Archbold Buckeye, “Although the old church will seat about 700, it is so crowded as to often be uncomfortable, and on special occasions, many were obliged to stand outside or go away. To satisfy those who come from east of Pettisville and those who live near Lockport, meeting houses will be built at both places.”

The new church building at West Clinton, east of Pettisville, was built in 1908 for a cost of $2,660.72. In the early days, meetings were held at the church only every other week, with members attending Central on the alternate weeks. Lockport church services were held with the opposite schedule.

In 1915, West Clinton members held their first independent service, but it wasn’t until 1944 that the church became an entirely separate congregation. They remained in the same church conference.

The original building was enlarged in 1935, and then replaced entirely in 1968 with a much larger building where the congregation continues to meet today. The current building underwent a major remodeling and expansion in 1996.

A brochure on the history of the church, published as part of the anniversary celebration, states many things have changed within the church over the past 100 years.

The brochure says, “Styles have changed, but the people remain the same, devoted to Christ.”

The brochure concludes with a quote from Philippians 1:21:

“As for me, to live is Christ and to die is gain.”

The West Clinton congregation has been trying to live out that verse for the past 100 years.- D.J. Neuenschwander