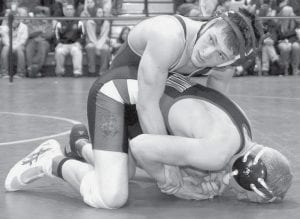 Trevor Meyer, an AHS senior, ends his high school career with a 24- 14 record after finishing sixth at the district.- photo by Scott Schultz

With the top four places in each weight class advancing to the state tournament this week in Columbus, the season came to a close for some, while others will pursue higher goals.

In the event a wrestler cannot compete at the state level, the alternate is eligible to take his place.

At the district meet, three wrestlers from the Archbold sectional were not eligible to compete, but in two of the weight classes the alternate was not present.

Weirauch won a 4-3 decision in his opening match over Mohawk’s Kyle Parker, but was dropped into the consolation bracket by Edison’s Tim Majoy in the quarterfinal.

Weirauch scored a pair of wins in the consolation bracket, pinning Liberty Center’s Ben Martinez at 2:32 and scoring an 8-5 decision over Carey’s Eddie Fredritz.

In his go-to match, Weirauch faced McComb’s Jacob Haas and came up short, losing a 13-8 decision. Weirauch faced Otsego’s Kodie Glosser in the match to determine fifth, and recorded a 14-6 major decision.

“You never want to say you won’t get in,” said Mario Gomez, AHS assistant coach. “We had three guys this week that could have gotten in from our sectional.

“TJ will have to stay ready. TJ is focused. He got beat out last year in the consolations, and this year he was really close to qualifying. TJ wrestled well, and we are hopeful for next year.”

Brian Becher, Archbold head coach, could not comment due to illness.

Meyer wrestled his way back into contention, pinning Crestview’s Jake Hedrick at 4:07 and picking up a 12-8 decision over Liberty Center’s Chris Rentschler.

Meyer recorded a 16-12 overtime victory over McComb’s Chris Osborne in the third consolation round, putting him in his go-to match, where he faced Mohawk’s Devin Cartwright. Meyer’s chance at a trip to state came to a close with a 12-4 loss.

Wrestling for fifth, Meyer closed out his senior year with a 5-0 loss to South Central’s Payton Oney. Meyer ends the year with a 24-14 record.

“Trevor has been going hard since his freshman year,” said Gomez. “He had some shoulder trouble this year, and it has to be hard for a senior to go through the season the way he did. Because of his injury he started his season back up after sectionals and wrestled well. Every match he had after his first loss was close.”

“He beat Rentschler, who had beaten him the last four times.

“Trevor has always worked hard. He has been a great leader in the practice room. He isn’t that vocal, but he works hard and gets everyone around him to work hard.”

Fidler’s Season Goes By Too Fast

There are wrestlers who have spent their entire high school career wrestling and never reached district.

Jake Fidler set an example for all to follow: if there is something you want to do, just do it!

The 171-pound senior first-year wrestler challenged himself and succeeded.

Facing Monroeville’s Chris Phillips in the opening round, Fidler was pinned at 1:43.

A sophomore, Phillips is the returning state champion and is also the projected state champ.

Fidler ended his senior season by losing 5-1 to Raymond Hopfinger of Port Clinton, closing out his career with a 25- 26 record.

“We will say it a long time. We wish we had Jake for longer than we did,” said Gomez. “Jake came out in the middle of the year and made big strides and started understanding the whole thing. It took him a while.

“He really took wrestling to heart. He was a big contributor for us.”