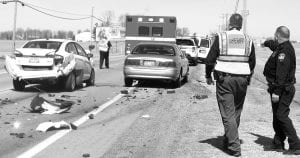 An Archbold police officer, far right, points out an aspect of the scene of a Wednesday, March 27 crash to a Fulton County sheriff deputy. Two people were taken to hospitals as a result of the crash. One driver received a citation for failure to maintain an assured clear distance ahead.– photo by David Pugh

The Ohio State Highway Patrol report on the crash states at about 1:20 pm, all three vehicles were traveling north on the highway when a car driven by Yolanda Cuellar, 48, Archbold, struck a car driven by Lydia Jean Grime, 17, rural Montpelier, in the rear.

Grime’s car then collided with a van driven by Cory Wickerham, 44, rural Stryker, owned by Creighton Electric, Archbold. The van was then struck by Cuellar.

Archbold Rescue and ALS-8, the Wauseon-based paramedic unit, responded to the crash scene.

A passenger in the van, Trevor Lechleidner, 21, Defiance, was uninjured.

ALS-1, the Archbold paramedic unit, was on another call at the time of the crash.

Cuellar, who was not injured, was cited for failure to maintain an assured clear distance ahead.