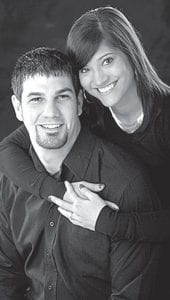 Roger and Beth Weber, Pettisville, announce the engagement of their daughter, Whitney, to Wade Knipp, son of Steve and Molly, rural Archbold.

The bride-elect is a 2007 graduate of Pettisville High School. She earned an associate degree in office administration from Northwest State Community College in 2009. She is employed at Quiznos, Napoleon.

Her fiancé is a 2007 graduate of Archbold High School. He earned an associate degree in applied science and GM ASEP in 2009 from Owens Community College. He is an auto technician at Don’s Automotive Group, Wauseon.

The couple will exchange wedding vows in an outdoor ceremony near Archbold on Aug. 28, 2010.