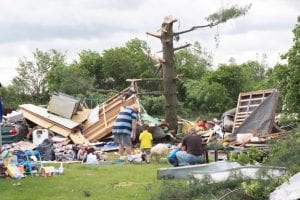 This is what remains of one of the homes struck by the tornado near Delta in Fulton County, Saturday night, June 5. Click on the Big Blue Button above to see all photos taken of the affected area.–photos by Mary Huber

Four people were injured, one seriously, as a result of a tornado which roared through Fulton County, Saturday night, June 5.

As of 5:23 pm, Sunday, the National Weather Service determined Fulton County was struck by a EF2 tornado that "began around along Highway 109, just east of Co. Rd. A, and continued (northeast) 7.5 miles, before weakening as it passed into Lucas County.

Justin Thompson, Fulton County Emergency Management Agency director, said the most heavily damaged area was bounded by County Road 7 on the west, Co. Rd. C on the north, Co. Rd. 4 on the east, and Co. Rd. A on the south.

At midday Sunday, he said EMA officials had noted 22 affected homes. Of those, six or seven had moderate damage, and four were considered completely destroyed.

Unverified reports from the scene say the most seriously injured victim was a woman whose home collapsed around her. She reportedly managed to crawl from the wreckage of her home and made her way to her neighbor’s for help.
Ted Strickland, Ohio Governor, declared Fulton and Wood counties disaster areas at 8:30 am, Sunday.
Kelli Blackwell, public information officer with the Ohio Emergency Management Agency, said the declaration allows local officials access to state resources.
However, the state declaration is not a federal declaration, which means Fulton County won’t be able to tap into federal resources such as the Federal Emergency Management Agency.
The Weather
An EF2 tornado is a number two ranking on the "Enhanced Fujita" scale.
The Enhanced Fujita scale starts with an EF0, which features winds estimated at 65 to 85 miles per hour, and goes to an EF5, with winds of more than 200 mph.
An EF2 has estimated wind speeds of 111 to 135 mph.
On source describes an EF2 as causing "considerable damage. Roofs torn off well-constructed houses; foundations of frame homes shifted; mobile homes completely destroyed; large trees snapped or uprooted; light-object missiles generated; cars lifted off ground."
Most of those damages can be found in the affected area.
Ken Ludington, a meteorologist with the National Weather Service, said the storm that hit Fulton County was spawned by a stationary front running through southern Michigan, with a low-pressure wave moving along it.
That scenario, plus local conditions, made everything right for long-lived storms, with proper conditions for rotation that can lead to tornados.
Based on conditions, plus tornadic radar signatures, the NWS North Webster office issued its first tornado warning at 9:47 pm, and continued issuing warnings until 1:47 am– the last one for Miami County in Ohio.
The Fulton County Sheriff Office dispatch center sounded the county tornado sires at 9:59 pm, when North Webster first issued a warning for Fulton County.
First Calls
Thompson said the first tornado warning was to expire at 10:45 pm, but the National Weather Service extended it to 11 pm.
Around 11 pm, Fulton County began getting calls about damage in the Delta area. Travel in the area was made difficult by downed trees and power lines.
At one point, a house fire was reported on St. Rt. 109 at County Road A, north of Liberty Center.
There was a report of a propane leak, but Thompson said the tank leaked all of its contents, and the propane dissipated in the wind.
The Fulton County Red Cross was notified at 2:12 am, Sunday, and at 4:30 am, the Delta Memorial Hall was opened as an emergency shelter.
Thompson said county cars, normally used for the Fulton County Senior Center’s Meals on Wheels program, were dispatched to Delta to shuttle victims from the damaged area to the shelter; but those who did go to the shelter made it on their own.
About a dozen people were at the shelter. Thompson said they left once the rain stopped.
Also, the State of Ohio Emergency Management Agency was called for assistance.
Commissioners
Reports are Dean Genter, Fulton County commissioner, was at the Emergency Operations Center during the early hours of Sunday.
Joe Short, commissioner, said he visited the affected area late Sunday morning.
He said he saw "friends, neighbors, and volunteers with chain saws and front-end loaders.
"It was neighbors helping neighbors," he said.–Posted 6.6, 6:30 p.m. 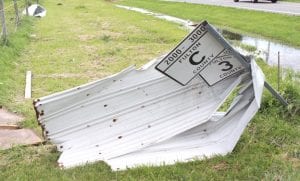 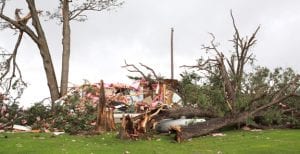 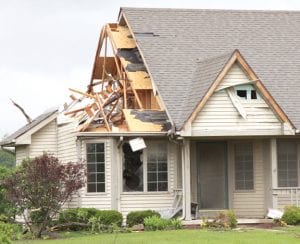 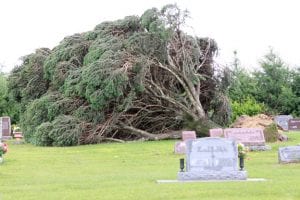 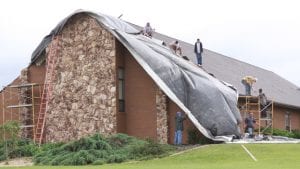 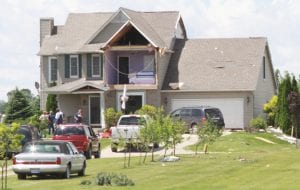 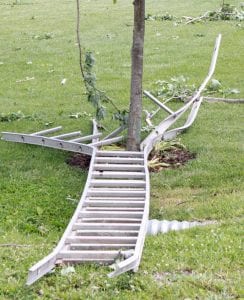 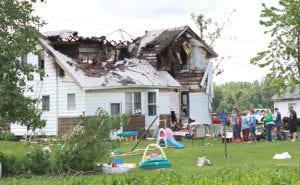