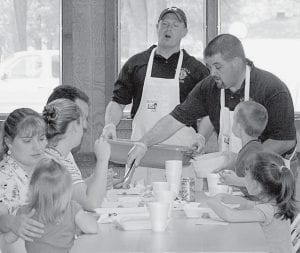 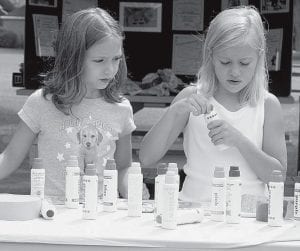 Thunderstorms were predicted for early Saturday afternoon, and while a few widely scattered sprinkles fell, the skies cleared and the day turned pleasant, if warm. 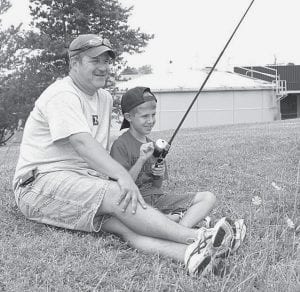 Jerry Rohrs, a member of the Archbold Lions Club and one of the organizers of the Carp Fest, said this year’s event "was as good as any.

"It looks like we might have made a little more than usual from the auction, (and) about the same from the fish fry and the raffle," Rohrs said.

The Lions served about 300 pounds of fish, down from last year’s 330 pounds.

"It was a typical year: good music, good food, and fun," Rohrs said.

The fish fry "started slow, but picked up in the middle and kept going. It stayed busy through the end. We didn’t have the talent show this year, but there was a good crowd for the auction," he said.

Nanette Buehrer, director of the Archbold Area Chamber of Commerce, said from her perspective, Saturday’s Art in the Park and the Biz Expo went well.

"We dodged a bullet with no rain. That helped tremendously.

"People seem to enjoy themselves, and the vendors thought the event was well organized. At lunchtime, people were five and six deep in line at the food vendors.

"The inflatables were busy all day. It was a great idea to put them under the shade, for the kids and the parents. The Art Zone was busy; kids seemed to enjoy that," she said. 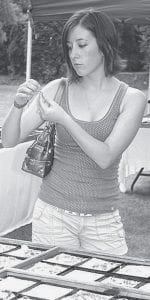 "We had about 10 vendors who were a no-show. The threat of rain may have kept them away," she said.

"It was full, and having the pavilion open gave us extra bathrooms and air conditioning. All the exhibitors seemed to be happy.

"My own perception is (the crowd) was light between 10 and 11 (am), but then the sky started clearing, and from 11 to 2 (pm) it was really good. Then it was a little lighter until 4. People were shopping right up to closing at 4."

Buehrer said the crowd was composed of all age groups.

There was a nice variety of art, from oil and watercolor paintings to pottery.

"Even if people were not buying, they could appreciate the quality of the work," she said.

The last Friday night event was the Splash Dance at the swimming pool.

Buehrer said she will be sitting down with Kidder and representatives of the Lions Club to talk about this year’s event, and how Carp Fest can be expanded for next year, its 30th.

"We want to do some special touches," Buehrer said.- David Pugh