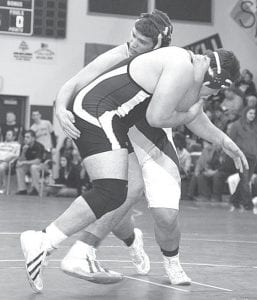 Archbold’s Brandon Dennie and Swanton’s Mimmo Lytle wrestle in the 285-pound title match at the NWOAL Championships, Saturday, Feb. 13. Dennie finished second after getting pinned by the Bulldog.– photo by Scott Schultz

It was a long dry spell for Wauseon when it comes to winning a Northwest Ohio Athletic League wrestling championship.

The drought is over.

After marching through the dual meet portion of the 2009-10 season with a perfect 8-0 record, the Indians strutted their stuff and tallied 191 points to win the league tournament, Saturday, Feb. 13 at Swanton.

“We obviously didn’t wrestle very well today, although there was some bright spots,” said Brian Becher, AHS head coach. “Guys are starting to get more aggressive. 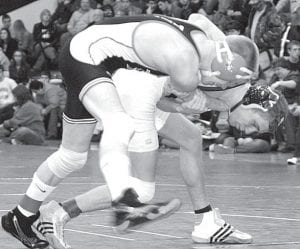 “Some of the sophomores are real close to turning the corner. They just aren’t quite there yet and there’s not much time left to get there.

“At least they are wrestling with a little bit of attitude, which is nice to see.”

Finishing the dual meet portion of the season with a 6-2 mark, Archbold’s chance of contending for a league title would be a long road to travel with three weight classes being void.

Oliver Stuckey wrestled one match, but illness took the 130-pounder out of competition.

The Streaks were also void at 125 lbs.

“Not having scored in those weight classes, obviously we weren’t even near the top of the league standings,” said Becher. “This is probably one of our worst performances in some time.

“Most years it seems we wrestle well at leagues and then not well at sectionals, so hopefully we turn that around and have a good sectional.”

TJ Weirauch (119 lbs.) and Brandon Dennie (285 lbs.) got into the championship fi- nals, but both placed second.

Weirauch defeated Swanton’s Caleb Berry in the quarterfinal and pinned Evergreen’s Jamie Boger at 2:41 in the semifinal. That pitted him against defending league champion, Luke Kern of Liberty Center.

Kern was also a state qualifi er last year and is rated 14th in the Brakeman Report.

Kern took a 2-0 lead after the first period. With Weirauch starting in the down position to start the second, Kern added three back points for a 5-0 lead.

Kern added a takedown in the third, but Weirauch had a pair of escapes and a takedown with 10 seconds left. Kern defended his crown with a 7-4 decision.

“I didn’t think Eli (Urbina) would even be in his match against Baldwin,” said Becher.

“He wrestled hard and he just got a little too defensive. He was trying not to lose instead of wrestling to win.

“Ben (Eggers) has it rough in the wrestling room. It’s never fun being one of the littler guys; you take your beatings most every day.

“Ben and Justin Arce are not the most athletic kids, but they do anything you ask them to do and they wrestle hard.

“Ben has definitely improved over the course of the season.

“He’s just a smart kid and goes hard all the time. He’s going to be really tough for us, and I hope he has a good weekend for us at sectionals.”

“I think there will be a big difference when we wrestle at sectional this weekend,” said Becher. “We battled tough at leagues, so I think we will wrestle tough at sectional.

“As far as the season went, with this group of sophomores it’s like Forrest Gump and his box of chocolates; you just don’t know what you are going to get.

“But this sophomore group is wrestling with a lot of confi dence, so I am expecting big things from them next season.”

Wrestling begins at 10 a.m. on Saturday with the championship semifinals and consolation quarterfi- nals and semifinals.

Consolation finals for third and fifth places begin Saturday at 5 p.m., followed by the championship finals.