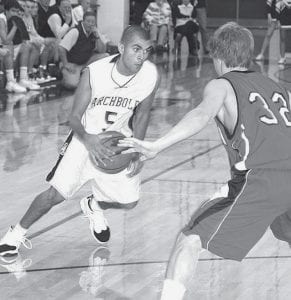 What better way to open the 2008-09 boys basketball season than with a good old-fashioned rivalry.

Archbold, which led the entire second half, saw its season- opening victory slip away on a Colt Humbert five-foot jumper as time expired, giving Wauseon a 45-44 victory.

The squads have a chance to reminisce later in the season when they meet at Wauseon for a Northwest Ohio Athletic League contest.

“It just doesn’t get much better than Wauseon-Archbold,” said Burt. “What a bang. What a way to start the season.

“It’s going to be hard to top this one for a first victory as a head coach. I go in the locker room and prepare a lot of speeches, but I was unprepared for that one. I am still at a loss for words.”

A sluggish first half for both squads resulted in a 25-21 AHS lead.

Christian Goering opened the third quarter by nailing a threepointer in the corner, pushing the lead to 28-21. The Indians, who hit only one field goal in the third period on a Humbert jumper, trailed 36-29 to start the fourth.

On the offensive side for AHS, Micah McQuillin rattled off eight of his team-leading 10 points in the third stanza.

Telly Fricke started the Streaks off in the fourth, coming up with a steal in front of the Wauseon bench. The sophomore went the distance for two and a 38-29 lead.

From there it was all Wauseon, which rattled off the next eight points to be down by one, 38-37.

Michael Thompson started the Indians with a deuce in the paint. Humbert hit a pair at the charity stripe, and Thompson hit again on a put-back, forcing Archbold to call a time-out.

“Micah has some skill inside and he can finish in there,” said Krauss. “He just has to keep working at it. We think he has a chance to make some plays for us this year.”

Coming out of the time-out, Wauseon’s Josh Dominique came up with a defensive rebound and went the distance for two with 3:20 left.

Ahead 38-37, Goering hit another three to push the lead to 41-37. Thompson answered for Wauseon, and McQuillin added one from the charity stripe.

Dominique, who led WHS with 14 points, added a pair from the free-throw line, closing the difference to 42-41. David Rupp found his way to the foul line with 31 seconds left and made both ends of a oneand one for a three-point 44-41 Archbold lead.

Looking to tie the score the Indians missed, but after a scramble Dominique came up with a loose ball and hit a deuce with 20 seconds left.

The Indians fouled Rupp on the inbounds pass. After the senior missed at the free-throw line, Jordan Brock had an open shot for the Indians that went in and out.

Again Rupp came up with the rebound and was immediately fouled, but he missed again at the foul line with five seconds left.

Thompson grabbed the rebound, raced down court, and let one fly that hit nothing but net. But the basket was called off as the Wauseon bench had called for a time-out.

“Oftentimes the first game of the year, traditionally we maybe haven’t shot foul shots very well the first game. Unfortunately, it came back and bit us in the hind end. That’s part of the game; you take the good and the bad,” said Krauss.

With 1.4 seconds showing on the scoreboard, Brock’s inbounds pass found its way to Thompson, but the senior was too far under the basket when he caught the ball. He spotted Humbert for the five-footer at the buzzer for the 45-44 final.

“They ran the back route screen,” said Krauss. “I think what happened is, when the ball is lobbed, kids kind of watch the ball, and Thompson made a nice pass to Humbert.”

“One point four seconds on the clock- your repertoire is sort of limited,” said Burt. “I have to give coach Matt Hutchinson credit. I took a back seat, and he drew up that last play.

“It was supposed to go to Michael (Thompson). What an athletic play for him. Give credit to Colt (Humbert), shooting with not much time on the clock, and in this atmosphere… thank goodness for us he knocked it down.”