Water Contamination Is Topic At Council 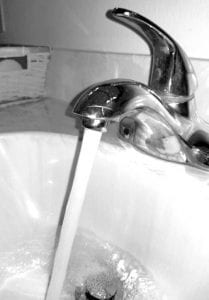 Archbold Village Council was questioned about the quality of Archbold municipal water during its Monday, June 3 meeting. Village residents received a notice that TTHM, or total trihalomethanes, exceeded state regulations by two-thousandths (.002) of a milligram per liter of water.– photo by David Pugh

Vaughn Bentz, a councilman, said the OEPA allows up to .08 milligrams per liter, or mg/L, of total TTHM.

Tucker said he moved to Archbold two years ago. He has family near Morenci, Mich., and spread out across the state of Ohio.

He moved to the village because he said he likes the family values of the community.

He has children and grandchildren, and is concerned about Archbold water quality.

Donna Dettling, village administrator, said the village has been aggressively working on the issue of TTHM in the water supply.

Archbold, she said, is not under OEPA findings and orders to remedy the situation.

Jeff Fryman, mayor, said OEPA has changed the requirement for TTHM, making it difficult to reach the target level. He said Archbold does not have trouble with lead contamination or other issues.

He said the village is taking steps to address TTHM, including resin filtration.

Several other communities are struggling to meet the new OEPA criteria.

Trihalomethanes are byproducts of the water treatment process.

Information from OEPA, available over the Internet, said most drinking water is treated with disinfectants to kill germs.

Disinfection byproducts form when chemicals such as chlorine react with organic and inorganic substances present in raw water.

The longer finished treated water spends in the village storage and distribution system, the more time TTHM has to form.

OEPA tests for TTHM are conducted at the worst possible locations within water distribution systems, such as at the ends of dead-end waterlines.

Dettling told Tucker the Defiance County community of Evansport receives water from the Archbold system via the Corrections Center of Northwest Ohio. It can take days for water produced in Archbold to reach Evansport.

She said Evansport is under OEPA findings and orders to resolve the problem. Archbold officials are working with Defiance County officials on the issue.

The OEPA website states, “There have been many studies on the health effects of exposure to disinfection byproducts. Although some studies indicate the potential for both short- and longterm adverse health effects, others do not.

“Some potential health effects include cancer, as well as reproductive and developmental disorders.

“There is still a lot of uncertainty regarding any one individual’s risk when exposed to levels of disinfection byproducts above the maximum contaminant levels.” system was added to the village water treatment plant in 2013, at a cost of around $2 million.

When the resins were originally installed, they were anticipated to last as long as 10 years, but “wore out” much sooner.

Village officials are currently studying different types of resins to determine which would best fit the local requirements.

Bentz said Archbold has committed $1 million to the construction of a new village water tower. The tower will include an aeration system to combat the TTHM issue.

Tucker asked if federal help is available to resolve the TTHM issue.

Dettling said it would be easier for the village to get funding if it was under OEPA findings and orders.

The village is not currently under any such sanctions.