Watching History Being Made 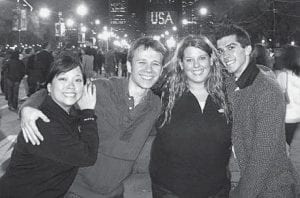 Grant Park in Chicago, Ill.- home of Lollapalooza and countless corporate softball leagues- was inundated with over 200,000 people for Barack Obama’s acceptance speech as president-elect. Matt Switzer, a 2000 Pettisville High School graduate, and friends had tickets to the main field and a prime vantage point for the speech. “For how long and grueling this election has been, Grant Park offered a sense of solace, a sense of accomplishment, a sense of disbelief,” said Switzer. “We repeatedly overheard fellow spectators say things like, ‘I never thought this would happen in my lifetime.’ The biggest takeaway from the experience was not that Obama won. Rather, we left with a feeling of accomplishment of historical significance.” From left: Judy Hsu, a friend from Marysville; Switzer; Shannon Liechty, a 2000 PHS graduate; and Allen Santiago, a 2002 Archbold graduate.- photo courtesy Matt Swit z er