Walking With A Purpose

Man Treks Across Nation To Raise Awareness For Organ Donation

by Mario Gomez
Special to the Buckeye 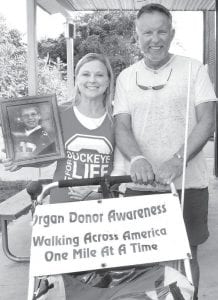 Tonya Gomez, Archbold, left, with Don Erickson, Des Moines, Iowa, who is walking across the United States to promote organ donation. Gomez is the recipient of a double-lung transplant. She holds a photo of Adam Schwalenberger, whose lungs were donated to Gomez.– photo by Mario Gomez

People use walking as a form of exercise and to improve their health. The more a person walks, the better.

For Don Erickson, 55, Des Moines, Iowa, his reasons are more of a personal nature, and his walk is measured in miles, not city blocks.

Erickson is walking across the United States to raise awareness for organ donation.

He made his way through Ridgeville Corners, Tuesday, July 30.

His push to bring a message of organ donation came from a personal loss.

“A couple of years ago, a really good friend of mine’s brother passed away. His name was Joe Rethmeier,” Erickson said.

He had told his mother he wanted to be an organ donor.

Both of his lungs, kidneys, heart, and corneas were donated.

“I decided to do something on a larger scale and walk across the country to honor Joe’s memory.

“I figured I could raise a little bit of money, but that isn’t the biggest thing. It’s mainly an awareness thing.”

Around the U.S., thousands wait for precious organs that can help extend and improve their lives.

Every 10 minutes, another name is added to the national organ transplant waiting list.

“There is no reason why (people) should not, if in an untimely death, donate their organs so that there aren’t people on waiting lists for years and years and people end up dying because we don’t have enough organ donors.”

Erickson’s journey is documented on the Facebook social media page, “Organ Donor Awareness; One Mile at A Time.”

To become a registered organ donor, go to donatelife.net and click on the “register now” bar.

From Iowa to New York

Erickson flew to New York on June 11. Pushing a small cart, he started his walk the next day.

“I spent a little bit of time in New Jersey, working my way up to Route 6, which was my original plan.

“I entered into Pennsylvania and began walking through the hills.

“I didn’t know that it was so hilly. It was about a month of hills.”

“I remember stopping in a diner after I was a week into Pennsylvania and asked an old timer, ‘When do I get out of these hills?’

“The old man calmly took a drink of his coffee and said, ‘When you get to Ohio,’ and it was true.

“I haven’t had any confrontations or anything like that. I did see two bears in New Jersey.

“The biggest concern or danger that I’ve had has been cars. There’s always a few (drivers) who are playing with their radio or putting on makeup, or the biggest one is texting.”

Erickson does not walk an extreme distance each day, nor does he walk at night.

“I try to keep it under 20 miles (per day), but somewhere around 15 at the least so I can still make it out to California sometime in January.”

Erickson has experienced the unselfishness of people who want to help and wish him well.

“I didn’t quite know what to expect, but the generosity of people, the interesting stories that people have told me…” he said.

“Just generous people that have given me money or a place to stay.

“Definitely volunteer and hired fire departments all the way through Pennsylvania and now Ohio have been fantastic help.”

One thing that sticks out in Erickson’s mind: gloves.

He started seeing a lot of gloves along the road.

“So I started taking pictures of beautiful scenery and people I’ve met, but also these gloves,” he said.

Joe’s mother said it can be looked at as a “high five” from Joe in heaven for doing the walk.

“So every day I look for my ‘high five,’” Erickson said.